At last we have the typical deep cold of mid winter with shrunken, clear flows.  I hear conflicting reports of grayling catches from all over Britain.  It is interesting to note that while the effectiveness of grayling fly fishers has improved considerably over the last few years, evidenced by the capture of some wonderful fish, populations of this species are not as healthy as they should be in many if not most British rivers.  One recurrent theme is the quality of the specimens caught, while the shoals of one, two and three year group fish appear to be declining.  Agricultural damage (largely via siltation from ruined substrate) and fish eating birds, particularly cormorants, are top of the list of threats to wild trout and grayling populations.

Here on Eden I have been catching low numbers of fish in a typical session – one hour – though the quality has been breathtaking, mostly around 40cm, at which length a fish from this river system is around 2lbs.  Every fish has been taken on Czech PTNs, most often on a double nymph rig with a 16 on the dropper and a 14 or 12 on point.  I have been using exclusively a presentation leader with either 0.13 (2lb) or 0.16mm (3lb) FM fluorocarbon which is utterly dependable for all river nymph fishing (while the 0.13mm is excellent for dry fly). 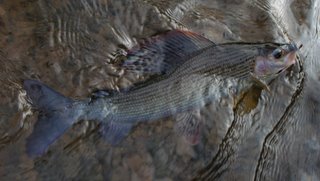