Throughout much of Europe, the weather has been unusual, to say the least!  Here on Eden it is currently more like April, with torrential, persistent rain.  Fishing has been limited to windows in the weather when the river drops away sufficiently.  Hatches are now consequently poor.  I have had to postpone several guiding/coaching days, so apologies to those concerned; we will make alternative dates later in the year.  Throughout the spring, hatches and catches were outstanding, as previously reported, but now we have to hunt down each fish and really work at it.  Nothing wrong with this of course; it is good, demanding fishing, but the contrast between now and a month ago is startling.

I visited the tarn last weekend and cast a Diawl Bach into the channels among the now dense beds of curled-leaf pondweed.  A single, solid take resulted in this magnificent fish, which essentially is a feral rainbow trout, having been stocked as a fingerling in 2005. 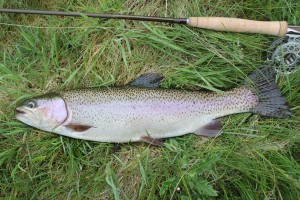 Last Thursday, while fishing with Lawrence Greasley, an Appleby Angling member, we saw two dead trout at Bongate Weir.  We examined one of these and could not see any obvious cause of death – such as goosander stab wounds – so we were suspicious.  I will put a note up on the Appleby Angling site, but if anyone fishing the Eden also notices any fish kill, then something must have happened and it should be reported to the EA immediately.

We are off to Slovenia again soon and thoroughly looking forward to the spectacular fishing in this beautiful country, where the wild environment has a priority.

This has been one of the best spring fishing periods I have experienced, from mid-March until the very end of May, with outstanding hatches of March browns and large dark olives, followed by medium olives, olive uprights and spurwings.  The latter species are still active, though in diminished numbers since May, and are supplemented by black gnats and various caddis species, active mostly in the evenings.  The fishing has changed, and it is simply more challenging and demanding.  My own fishing has been dominated by leader-to-hand with CDC plume tips, mostly in size 19.  Earlier in the season, spiders were hugely effective in the riffles and surprisingly big trout were caught.  I have heard of numerous big trout from the Eden system this year, probably more than former recent seasons, with two giants, one of 4lb 10oz (Eden, Appleby waters) to Steve Dawson and another of 4lb 14oz (Lowther) to Howard Croston.  Both fish on dry fly, almost inevitably!

It is not all good on the Eden, however; no fisherman, or walker, can fail to notice the enormous amount of agricultural rubbish in the river and festooned upon the banks and bank-side trees.  And this is the visible material.  Siltation is a terrible problem now downstream (although the damage is done by overgrazing and tractor compaction damage upstream).  One is in a state of wonder how this SSSI and European Special Area of Conservation, is so incredibly abused.  Obviously the Environment Agency, whose remit it is to protect such rivers, is in states of both dismal failure and denial.  Government will not admit to the conspiracy of wealth creation for the few (land and farm-stock owners, and supermarkets), and so the fate of rivers like the Eden is determined beneath a shadow of hypocrisy. 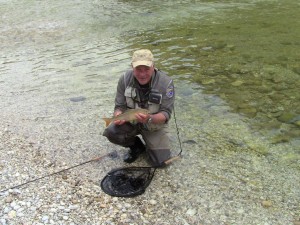 I have just returned from a trip to Slovenia – coaching the Australian national team prior to the world championship in that country.

Here, among the astonishingly beautiful alpine scenery, the fishing was outstanding.  But also, as always, we were all so impressed by the value given to the landscape and the wildlife to which it is home.  Walkers and fishermen are even discouraged from crossing the wild flower meadows and are asked to keep to the edges.  Agriculture is contained in sustainable units and we did not find any farm waste in any of the magnificent rivers we fished.  After June on Eden with various guests, we are going back to Slovenia for two weeks with groups.  Next year I will also be taking at least two groups to Slovenia, and another to Czech, so anyone interested should get in touch with the idea of booking a place soon.