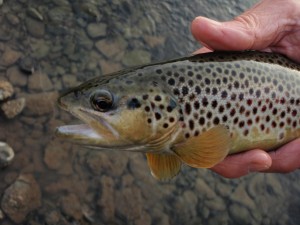 I have just returned from the magnificent San in SE Poland and have that re-affirmation that this river is Europe’s premier trout and grayling river, at least on such a large scale.

We enjoyed hatches of blue winged olives and pale wateries and the fishing with the CDC plume tip was incredible.  Many anglers have been worried about the San over the last few seasons, because the grayling had appeared to be becoming more scarce; but their fears are groundless. The grayling are still there, and in very healthy numbers, through all age groups.  The issue is the population explosion of trout. 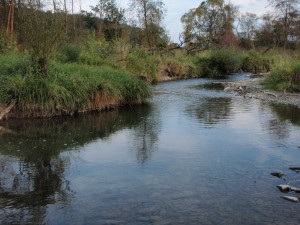 At times, during a good hatch, there are so many trout on the surface that it seems the grayling have no chance of feeding on the top food form – the ephemerid duns.  I fished in one section of the tail water in which I had 18 trout before I had a single grayling.  I then caught seven grayling before the next trout, and all of these from an area of river of approximately 100 square metres!  Towards the end of the trip I was fishing further up the tail water section, close to the turbines, and in the dying 30 minutes of evening found myself within casting range (10 metres) of more than 20 trout, simultaneously, all feeding precisely and accurately (more like grayling) on the spinner fall.

The river was beautiful, with the immense, surrounding forest just beginning to turn; aglow with autumn colours.  Not for the first time I was so envious of Poland, which in areas such as this – at least – is looking after their landscape and not allowing it to be destroyed by agriculture.  The hatches were simply as they always have been; blizzards at times, lifting the indescribable populations of trout and grayling to the surface. 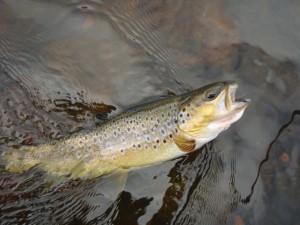 Back on Eden, the rain and the run-off from the over-drained landscape, has rendered the river into a muddy torrent for much of the time, though in the windows during the weather, autumn fishing has been excellent.

The blue winged olives have been (mostly) disappointing, though there have been plenty of pale wateries, which both trout and grayling have preyed upon relentlessly.  This being said, the late summer and autumn has been more ‘nymphy’ than dry fly orientated.  My friend Tom Speak has had some spectacular sessions, including a single day in which he caught 50 measurable fish, with several trout and grayling in the 40cm – 50cm class.  These are fish in excess of two pounds in weight.  Numbers are falling away now, as are the density and diversity of hatches, but some very large grayling are being caught and this could continue throughout the winter.  I will be continuing to fish dry fly as far into the year as is reasonable – and this might be almost all winter – but soon the nymph will become dominant, for sure, unless during hatches of large or medium dark olives, which can make an appearance on even January and February days.