I am in now sorting out the calendar for next year’s courses and hosted trips.  I will put these up on the web site shortly.

The autumn fishing on the San was magnificent, particularly for trout, in numbers; so prolific, in fact, that we had to fish through these before being able to access the less aggressive grayling.  I heard from Wojtek recently that the Polish Angling Association electro-fished a 200 metre length of the tailwater section and took out a ton and a half of brown trout.  Impressive in itself, but 120 of these fish were in excess of 50cm, with a largest at 70cm!  All of the captured fish were later released downstream, close to the house.

Autumn has disintegrated into very harsh, winter conditions in northern England.  Eden has fished remarkably well during the occasional windows in the weather, when low and clear enough.  We currently have sleet and snow and the river is lifting yet again.  When it finally settles it is bound to be ‘nymphy’ and will remain thus unless we have mild conditions that will precipitate a midge hatch (hugely under-rated food form on the river) or, best of all, large dark olives. 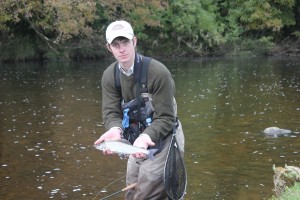