Sometimes I am astonished by the Eden.  This fish 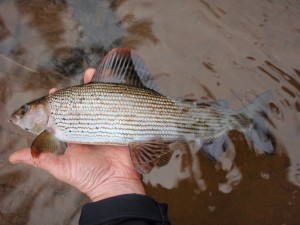 was caught last Friday, among a catch of five fish in 12 casts on the Appleby waters.  I just hit the ‘purple patch’ of the day as I arrived, on waters that had not been fished since the last flood.

Double nymph on a leader-only rig is working well, probably better than any other approach.   My favoured nymph combination is a Czech-style (leggy) PTN on the dropper,  40cm up the tippet from a hare fur bug with 2.7 mm copper tungsten on point (which you can see in the mouth of the fish).  I am using a 12-strand furled horse hair section (well greased with red tin Mucilin) in place of the usual braided nylon mono of a presentation leader-to-hand on the inevitable Greys Streamflex XF2 10′ 2-weight.  Tom Speak, who is probably even more tuned into the northern river-scape than I am at the moment has been varying between a Czech nymph set up on a Marryat 10′ 3-weight and a double nymph, Euro-rig on an XF2 11′ 3-weight, for astonishing results on both the Welsh Dee and the Eden.

The courses for the coming season are now updated on that page, so please have a look and get in touch if you are interested in these.

After such a long period of rain and even with the ground still completely saturated, the river Eden is at last in good condition: high but clear, and the grayling fishing is simply staggering! Appleby Angling member Tom Speak and I have managed to get out a reasonable amount lately on sections of river from Sandford down to the bottom of Bolton Willows. Double nymph on leader-only rigs has provided the most successful option. The trick is to find the most appropriate water, because otherwise one can waste too much time on unproductive areas. We look for depths between two and four feet, with not too much flow, though avoid the still pools because the nymphs have no ‘life’ in them in such places. You need to dead drift the nymphs with the current, as slowly as possible, and with nymphs that are not too big. Slim size 14 or 12 is typical. Ceramic nymphs have lately been deadly.  The grayling will do the rest. The best time is during the strongest light of day, from 10am until about 2pm.

Tom has had in the region of 50 grayling in excess of 40cm over the last year, while on Saturday 5th January he crowned an 11 grayling catch on Bolton Willows section 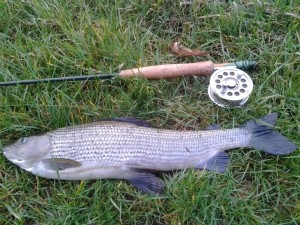 with a 45cm, 48cm and, astonishingly, a 51.5cm fish, as shown. We estimate the weight of this fish to be in the region of four pounds. There are very few rivers in Britain, or indeed anywhere, that can produce catches of grayling like these.

It is ‘an ill wind that blows no-one any good’, as the saying goes. I suspect that while the floods have seemed tumultuous they have done us a long-term service in washing the awful silt away. Compaction damage by the increasingly monstrous tractors on farmland in the eden valley has recently been immense and the result is a lot of silt. During low flows the silt settles and, among other detrimental environmental effects, smothers the water crowfoot and generally degrades trout and grayling habitat. The powerful flows experienced this year have left a river scoured clean.

One word of warning, however: in places the river has been changed considerably. One such area is downstream of the island at the bottom of Holme Farm. This has always been a difficult wading area, but it is now dangerous. I was wading here last week over mixed sand and gravel which seemed firm only to take a step into some very soft sand which seemed to have no bottom. It felt like quick-sand and I was lucky that one foot was still on the firmer bed. The flow is very strong at the moment and had I become only a little more trapped in the sand, I would surely have been overwhelmed by the waters. I thought I knew this part of the river very well, and so was not really being sufficiently cautious about my foot fall. Take care and whichever river you fish, enjoy your winter grayling fishing.