I might have asked if these are the most beautiful trout in the world.  Surely they can hardly be bettered?  I think these Eden fish are made even more beautiful by the way they have survived against the agricultural abuse that almost the entire Eden system suffers.  The new trout season has stuttered into existence, remaining challenging, in spite of strong hatches of dark olives and midges.  There are, indeed, very few small fish in the river nowadays, both because of the rapid degradation of suitable habitat and the goosander population; though the larger fish are doing well, and this is the case also for the grayling (which, as I write this are now spawning on the shallow gravels). 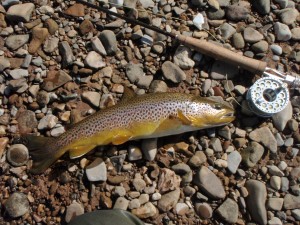 Suddenly, we find that nymph tactics are seldom the better option, now that the trout are so focused on the surface, with perhaps duo (nymph under dry) remaining a good compromise approach in the (commonly) windy weather.  Dry fly, especially in the form of CDC plume tips, is certainly giving the best approach for these hungry, though sensitive, wild trout.  The rises are invariably incredibly subtle, with the emergers or duns kissed away from the surface, such that they can very easily be missed on the broken water.  Many of the rises that I have finally converted to a successful acceptance of the plume tip, have been as much imagined as seen!  The quality of the trout has been astonishing and I really can think of no river in the world that could give better trout than these, in terms of the balance between size, adaptability, survivability and beauty.  It is simply tragic that the powers that be, have no regard for the value of these wonderful fish and the precious habitat that supports them.  SSSI and ESAC conservation designations mean absolutely nothing.  Anglers walking the banks are greeted with the sight of every bankside tree (where these remain), festooned with silage wrap and other waste from the farms; and this is the pollution that we can see!  Eden survives only because of its very large (by English standards) scale, and high average annual rainfall.  But it cannot last.

What an extraordinary opening to the trout season it has been on the Eden!  Dominated by the cold easterlies that have prevailed, deep into April, the river has been low and clear, and generally very difficult to fish.  Hatches of large dark olives, medium dark olives and at least one other upwing species, have been excellent, as good as ever; but rising fish have been scarce.  The shallows have been almost completely devoid of fish.  Several anglers have been out, of course, searching for the magnificent wild brown trout of this river, but generally catches have been poor.  One of the most outstanding river talents I have ever known, Tom Speak, fished intensively through the winter for the grayling, and made some spectacular catches, but his early trout season visits have been lean, as have my own.  Mark Warman, an Eden regular, enjoyed what must be an unusually successful visit to Bolton Willows (Appleby/Penrith shared water), with a dozen fish which included four brown trout over two pounds in weight, and some lovely grayling among them.  My own latter part to the grayling season was disappointing and the start of the trout season was certainly slow, though I did contact some magnificent fish, firstly on nymph rigs on the leader-only or duo, and just lately on plume tips (at last!).  While the hatches have been strong, the cold, bright weather, with those easterlies, have kept fish off the surface.  I have spent quite a bit of time searching the Appleby waters for risers, often to be disappointed.  I have yet to see a substantial rise. 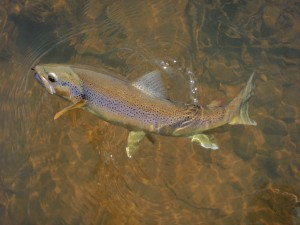 The hatches have mostly been from noon until about three in the afternoon, with only scatter appearances at other times.  You have to search carefully, over a surprising length of river; but almost always one eventually finds a rising fish, or two.  In the very low water, however, the approach has to be very slow and methodical, working one’s way into a good range and angle of the fish, taking account of the shadow direction and, particularly, the wind direction, in order to achieve a good presentation. I have noticed that even a strongly feeding fish takes only perhaps one in 10 of the emergers, or duns, passing over it. This fish, was carefully stalked, up on the severely agriculturally-damaged Sandford water, last weekend. I spotted it feeding right up against an overhanging alder, very precisely on a feed lane.  It was a rare success for me in this harsh spring, but worth every moment.  Frankly, on the inceasingly damaged Eden, a fish like this is worth a whole season’s effort.