It is different this year, but also the same as always?  Let me explain.  The river has a different ‘feel’ to it this year.  Perhaps it is the almost constantly cool weather and the fact that the seasons have been upended, or become out of phase; so that even though it is currently late May, it feels more like March.

And yet, the trout are where they always are, and the hatches have been superb, even though on some days they are disappointing.  When there is a hatch, it tends to be heavy (currently medium olives, iron blues, spurwings and a few olive uprights).  So, finally, the fishing is as it should be for the time of year, and there is a good population of much larger than average trout than hitherto.  This is certainly affording some very exciting fishing now, with dry fly particularly. The concern is mostly associated with the collapse of the populations of both trout and grayling juveniles, because it is unusual now to catch fish smaller than 25cm, and the average size for both species is now well over 30cm. 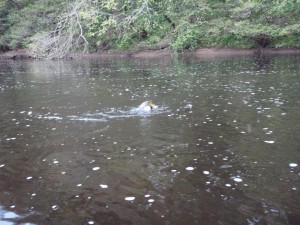 This is potentially very serious for the Eden system, because if for any reason the juveniles cannot survive in reasonable numbers, there will be insufficient recruitment.  Some anglers are pointing to the large populations of goosanders we observe nowadays, but though these birds undoubtedly have an effect, I believe it is clear what the main reason is.  One cannot visit anywhere on the system now without noticing the visible affect of agricultural activity in the form of hay and silage wrap, and all manner of farm plastics etc festooning almost every river-side tree.  The Environment Agency does nothing about this, so really the situation gradually worsens; and one does not have to extrapolate too far to imagine the less visible pollutants entering the system.

Silt is particularly destructive to the freshwater habitat, and we see this damaging effect everywhere now, from the over grazed banks that are collapsing into the river, to the river-side fields that are compacted and pulversised by the increasingly massive farm machinery.  The decline of water crowfoot is becoming obvious now, along with the catastrophic decline in juvenile fish populations – all of which are so intolerant of silt and other run-off from the farms. It seems extraordinary to me that while the entire Eden system is designated a SSSI as well as a European Special Area of Conservation, there cannot be even the most rudimentary effective conservation measures taken so as to prevent this habitat vandalism.  Is it a case that we will learn the lesson of this general apathy to what is happening only when it is finally too late to do anything worthwhile to prevent it?