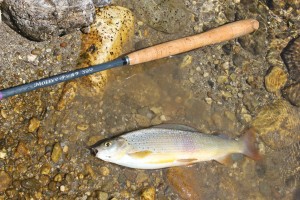 We have just returned from the best trip ever to Slovenia! Staying with Clive and Myrna at Reka Hisa on the banks of the Sava Bohinka we travelled each day to various rivers within an hour’s drive, discovering such Alpine gems as the Kokra and upper Radovna within the Tiglav National Park. 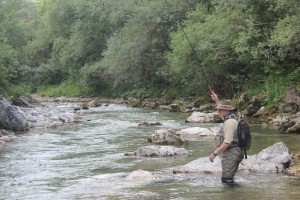 Signs of the times, in Europe, were the largely deserted rivers and we were never crowded away from areas of river we wanted to fish, even on the popular Bohinka.

Walking away from the villages and bridges – which see the most angling activity – we all found river space which gave the impression of never or seldom having been fished.  No signs of previous fishermen and, best of all, none of the agricultural litter that has bespoiled most English trout rivers.  My own total catch was in the region of 300 trout and grayling in the six days fishing, with the ‘best’ being a wild four pound rainbow off the Sava tailwater, taken on the inevitable plume tip.  I nymphed, with jig patterns only twice in the generally very low water.  The championship caddis, Muller and Oppo accounted for a lot of the catch on the faster, broken water sections, but on smooth water the plume tip (mostly size 19) was simply unbeatable, particularly for the larger specimens and grayling.  Paul fished rather more nymph than I did, and his catch was similar to mine each day.  Lawrence and Neil both put increasing emphasis on the dry fly through the trip and were rewarded by some spectacular catches.  Paul and I both had a few sessions with tenkara on the smaller rivers and delighted in the ‘precision’ that this approach allows, with minimal disturbance, though recognised its limitations, particularly in terms of the hand-lining necessary when dealing with even small fish.  The rest of the time I fished two- and three-weight Streamflexes with either a leader-only or two-weight fly line with horsehair furled tip and long tippet of 5X or 6X FM copolymer.  It was the perfect trip, in every way.