With water height perfect yesterday I visited the river and tried to ignore all the farm rubbish dumped there.  I’m glad I did because I immediately found fish rising to nondescript food-forms, which I think were midges, although I saw, increasingly through the afternoon, some caddis and even a few pale wateries.  As I set up I noticed a small rise in a riffle, and first drift down this with a plume tip resulted in a gorgeous small (which is unusual nowadays on the Eden) trout

and I suspected that this might thus become a red letter day.  The next hour, however, was filled with catastophe and frustration.  Lower down the same riffle (fishing in a strong downstreamer), I rose another larger fish and snapped off on the take, which is something I hate to do (and actually very rare fishing a two weight as I almost always do), and which in any case is simply bad angling.  I moved off upstream, to some sheltered, relatively slow and deeper water to find several fish rising.  I covered almost all of them, some of them several times, but suffered repeated refusals, even when downsizing to a 21 (again, this is unusual).  I reasoned that I needed the cover and disturbance of riffle water so reluctantly left these numerous, though difficult fish to find the broken waters upstream and, indeed, fewer fish feeding in mere inches of water (though they were invisible except for their rise forms). 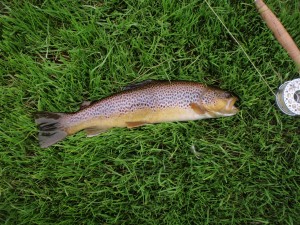 Four magnificent trout followed, all on the 19 plume tip, to put the smile back on my face.  Another lesson re-learned: take on rising fish in late summer in ‘inappropriate’ water and frustration is inevitable.  Even if you manage to cover them without spooking them, their alertness, and pre-occupation on a specific (often tiny) food form, will put you at a severe disadvantage.  It is always far better to find broken water, even if you suspect there are fewer fish there.  The point is they are much more catch-able!  So, yes the Eden is now severely damaged and abused by farm malpractice; yes, it is silting badly now, while the ranunculus is struggling in many areas; yes, the populations of juvenile trout and grayling have collapsed as a consequence; but the Eden, protected really by its large scale (by English standards) and continued high average rainfall, is still a miracle as a wild trout and grayling fishery. 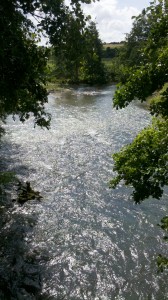 We have just returned from a trip to the Seven Valleys area of northern France, and frankly wishing we were back there.  This incredibly beautiful area being essentially an immense chalk plateau (actually, the largest chalk deposit in the world) is laced with trout streams among tranquil, wooded river valleys.  They are mostly small streams all flowing into the Canche which itself is 96km long, flowing out to the English Channel to the north of the Somme.  My explorations of these rivers has only really just begun, and I am overwhelmed by their discovery.  Among other species there are trout, but mostly in small numbers and generally very difficult to approach.  The higher up the river valleys one travels the clearer and thinner the water, and the more spooky the trout become. Lower, and the streams take on the characteristic chalkiness, though even here the trout are reluctant to give themselves away by rising too freely.  I keep thinking that it is rivers such as these that make the French such outstanding river fly fishers.  In England we are blessed with more prolific trout streams, generally, and although this makes for good catches, it does not necessarily lift the standard of the angling population!

I recently spent half an hour stalking a good fish on the Ternoise, which is simply idyllic, only to spook it as I parted a little bankside foliage (which is copious) and only as it bolted did I notice two other fish, also now spooked, darting for cover in the shadows.  I think that fishing these stunning streams is probably the most challenging trout fishing one can experience, but also among the most rewarding.  I suppose they appeal to a connoisseur and will certainly not be for all.  But then again, for those who yearn for rivers undamaged by agriculture, as they once were in southern England, they are perfection.  Since returning home I have had absolutely no inclination to walk down to the farm-damaged banks of the Eden, and still less to fish.  I am told there are grayling in some of these streams, though have not yet found them, and there are certainly sea-trout.  I am there again at the end of October, so I plan not only to find the grayling at that time, but also possibly to observe the sea-trout spawning in the head-waters of la Ternoise.  This seems a long way off, however, because my mind’s eye is transfixed upon images of the lush growth in and about the summer rivers in that astonishing area of France. I yearn to be there again, and I yearn for a return to some sense and honesty among British farming and conservation interests such that our precious wild rivers can remain as such.