Just back from a visit to the Welsh Dee, where I was hosted by the Corwen and District Angling Club, CADAC.  What a terrific annual event this is, where Pavel Adamovski, Dan Svrcek (of the Czech Republic) and I demonstrate the techniques of European nymphing and dry fly on the leader on the upper reaches of this magnificent river.  Saturday was cool, but delightful weather, and yielded a lot of high average size grayling, particularly to the dry fly.  The forecast storm of Sunday provided a vile down streamer and even I was surprised to find that the dries still performed well in those areas – not necessarily sheltered – where the grayling were rising to pale wateries and midges, though Dan did catch the biggest grayling of the day, at 47cm, on nymph.  As always, I was so impressed by this lovely river and its valley.  The population of grayling is to be envied (or treasured).  On the CADAC website you will read the claim of some of the best grayling fishing in Europe and I completely agree with this.  In fact, I would suggest that the Dee provides the best grayling fishing in the British Isles, with the possible exception of the Tweed and Annan in Scotland.  Looking farther afield to the European tailwaters I feel that only the San, in Poland, can better the Dee for grayling, largely because of the former’s sheer scale. 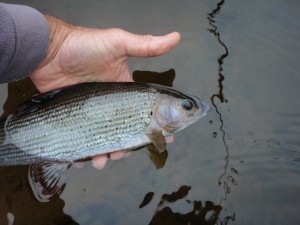 The Eden has been outstanding during late August and September, with enormous flotillas of black gnats which have brought the grayling back into our catches and completely pre-occupied the trout.  The Appleby waters have probably provided the best fishing on the entire system, from what I have experienced and heard about, with a high average size of trout and even larger grayling.  Accurate casting has been essential, for both species, because the fish have been locked very precisely on the feed lanes, with that characteristic, tiny rise form to the gnats.  My best fly, by far, has been a black CDC plume tip, tied ‘flat over the back’ style, in a 21, with the black being provided by a tiny dubbing of sheep wool.  Even now, with the weather change, the upwing hatches have been disappointing, but there is still time for the pale wateries swell in numbers, along with the dark olives and, hopefully, the blue winged olives.  There have been a few reports of small fish being caught, including trout parr and first year group grayling.  These have been noticeable by their apparent absence until this last month or so, and it is really so encouraging that these seem to be making a comeback, at least in those areas of the river that are not to heavily silted, which is exactly where they are being found, particularly in the faster water sections where goosanders have the most difficulty feeding, or where the presence of anglers and walkers tend to keep goosanders off the river, such as for example, in the town waters.

I’m off to Czech and Poland soon, fishing the Vltava and San tailwaters, among other rivers, but looking forward to what should be the best of the Eden’s grayling fishing of the year when I get back.  Let’s hope the BWOs make their usual autumn appearance, as surely they will on the San! 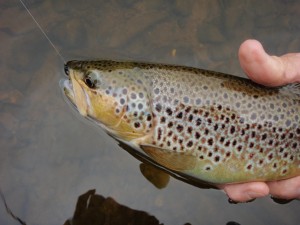 The river has been spectacular for the last few weeks!  Although the late summer/autumn hatches have not yet been as they can be (is this a result of the increasing siltation?), black gnats, or one of the various species to which we ascribe this name, have been a daily occurrence, and sometimes drifting down stream in rafts.  Both trout and grayling seem to feeding relentlessly on these very easy targets on the surface, to the preclusion of all else.  I have even seen pale wateries drift by unmolested, which is particularly unusual.  The grayling have re-appeared and now feature in most catches.  In my last four sessions on the river, I have had seven grayling, with four of these over 40cm, along with 30 trout between 25 and 50cm, every one of these to dry fly; either heron herl plume tip or, mostly, the black plume tip (both patterns in a size 19 or 21).  It has been methodical fishing, requiring good, clean turnover, and accuracy, because the better trout and all the grayling are locked onto the feed lanes and will not budge very far (and the grayling will not move a centimetre!) from their feeding stations.  It has been so good to find the grayling again and perhaps the best finding has been two areas where the populations of juvenile trout seem to be recovering.  One of these is high up the Sandford section of the Appleby waters, and the other is at Bongate weir.  Both of these areas are fast flowing gravel sections and it is this comparatively fast flow, I suspect, which is the reason that the juvenile trout can thrive here.  In so many other areas of the river, where the flow is slower, silt from the wrecked landscape of the river-bordering farms, is having its devastating habitat effect. Juvenile trout, and particularly grayling, along with numerous invertebrate species, have been devastated by this.  It is enormously refreshing to be able to be positive about the Eden.  We must all hope that the autumn rains flush through much of the silt that the glorious summer has left and that the juvenile grayling also re-appear.