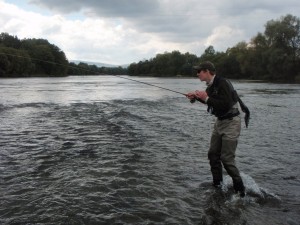 We were a little anxious leaving Czech and making our way to the San (I’ll be writing more about Czech, particularly the crowning glory of the Tepla Vltava, later).  The rivers of the Sumava national park had been overwhelming and I, for one, was cautious about expecting too much from the San. Might we even be disappointed? Poland’s premier river has had a couple of ‘testy’ years, with the fishing apparently in decline, at least compared with the ‘glory’ years not so long ago.  It is not that the big grayling, for which the river is so famed, were not there, rather than large numbers of small trout being dominant; so much so that many anglers have struggled to catch much else other than the smaller fish.  Of course, the quality fish were always there, and, finally, we need not have worried.  What was to greet us, however, was one of the most astonishing experiences of my fly fishing life. 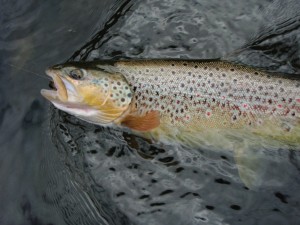 The San was low and clear, as is typical in the autumn, while the weather was bright and cold, much as it had been in Czech.  Along with a blustery, cold down-streamer, this was to persist throughout our stay, although there were calm periods, and in any case, just as we had done in Czech, in the face of a down-stream wind we simply cast across the stream, or down stream, with the dry fly, incorporating a stun or dump cast, with lots of ‘draw back’ on the leader/fly line with a very high stop point.  This allowed a reasonably long drag free drift. While not yielding the very best of presentation, the approach was certainly effective.  My first session, at the back of the house, was probably the best I have ever had in that particular location, though massively loaded towards trout.  They averaged a respectable 35cm, with two big grayling (the only grayling) among a catch of two dozen trout, all on the plume tip.  It was a phenomenal catch rate with an estimated rise to the fly every three casts – at least while the hatch of BWO persisted.  This set the pattern for the whole week, because the staggeringly intense hatches would kick off at about mid-day, and persist until about 4pm, and during this period every trout and grayling in the river were rising at them. 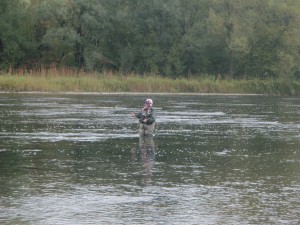 I have never seen so many fish rising simultaneously in any river in the world, and this on every afternoon we fished!  Up at El Dorado (on the ‘no kill’ sector), on the second day, I moved in to a spot where I usually expect a dozen big grayling in a long session, only to be surprised by a massive catch of 120 fish, of which only four were grayling!  All of these were on the 19 heron herl plume tip and a 3m tippet of Fulling Mill 6X copolymer (the latter being a wonderful find in the last couple of seasons).  When at last my companions came downstream to join me, I managed to tear myself away from the pool (and the old competition mode) and went off searching elsewhere, only then to realise how much my wrist was hurting!

The rest of our week found me being increasingly more selective of the water I chose, hunting as I was for the larger fish, particularly grayling.  I was only partially successful so far as the latter were concerned, although I did manage four fish at 45 – 47cm.  There is no question that the simply incredible, unimaginable numbers of brown trout now in the San tailwater have disguised the presence of the big grayling.  It is now necessary not only to choose the better grayling lies, by knowledge or by analysis/water craft, and then usually to fish through the trout until the grayling are found, which does not always work.  In former years I have always managed to do this, but in 2013, the trout population is such that this is not always possible, as in the above day on El Dorado. 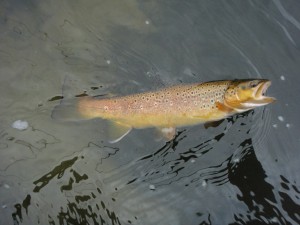 Not that this is necessarily a problem, because for sure there are some outstanding wild brown trout to be caught on the San; in fact an enormous number of these.  I always had the impression that I was simply scratching the surface of possibilities here, catching a mere fraction of the fish present, though when I did manage to break through the smaller trout (if an average trout size of 30cm can be considered small – obviously a relative term), the bigger fish usually encountered were also trout, mostly in the 40 – 50cm range.

So, hunting for the larger fish, of both species, became the goal.  After the astonishing experiences of the ‘back of the house’ and El Dorado, I was determined to be selective.  The ultimate challenge, as always, were the grayling, but larger than average (32cm) trout were also targeted.  While other members of our group did their own thing, I explored, to both old haunts and new areas with which I was not so familiar, always looking for new angles, a fresh approach, though always with the plume tip.  We had in our group two or three nymph-orientated fishers, particularly Paul (Sissons).  I am at the polar opposite nowadays, finding dry fly, specifically in the form of the CDC plume tip, on a different level in terms of selectivity.  So long as the water is chosen carefully, why should the dry fly fail?  Trout and grayling, particularly the larger specimens, are always focused on the surface, where the easiest target prey forms are to be found in the form of emergers and adults, especially the upwings.

On the third day, while my companions ranged out on the upper ‘no kill’ sector of the tailwater, around the islands,  I dropped downstream from the Vision hut in front of the islands.  This is a favourite hunting area for me, and I am usually astonished by the fish holding potential here. 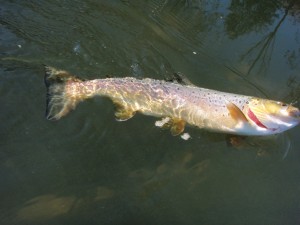 I was not disappointed, finding vast numbers of both trout and grayling along the entire length, though they were very much the ‘average’ sized fish.  It was the lower part of this section, a crescent-shaped pool of about 70 metres, that particularly attracted me.  This is a fascinating pool, always providing good numbers of trout and grayling (and big chub), while also being challenging in that in order to catch the better fish one needs to take account of the complexities of flow and depth.

On this occasion, I took several small trout and grayling off the usual ‘percentage’ water of the left bank, which is essentially a gravel glide of about two feet depth, though my attention was drawn by several whirling rises in the pool’s central section and towards far side: obviously trout because of the vigour of the rises.  Fishing dry to fish this position always presents the challenge of drag avoidance, the water closest to the angler being faster moving.  It was necessary to work out the very best approach, which in the downstream wind was necessarily from upstream, and drop a plume tip on the longest dead drifts possible over the broad feed lane.  I had already adopted to fish leader-only, because of that strong downstreamer, and this radically reduced the disturbance that a fly line presentation produces at such an angle of approach.  An alternative here is tenkara, again offering better presentation than western-style with fly line, but severely limited on range, and length of drag-free drift, both hugely significant factors on such large rivers as the San. 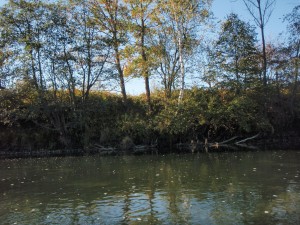 The contrast between the quality of fish out towards the pool’s far side compared with those feeding on the broad glide was startling; every one a perfect brown trout of between 35 and 45cm. It was fascinating observing the feeding behaviour of this patrolling shoal of large trout.  They never occupied the same space as one another, almost as if they were taking it in turns to glide up the central pool channel, taking half a dozen BWO duns in the process, and then drop back towards the tail while other fish mobbed the hatch.  I was initially very careful to be as accurate as possible, but soon found it more effective simply to dump the leader and fly with a lot of slack and a high rod point, and then to allow the plume tip to fall exactly at current pace – while I leaned over the fast water, thereby keeping the leader on the water only in the intended drift lane.  Even though the plume tip was on the water for a long time in each cast, there were very few drifts which did not result in a rise, so there must have been dozens, perhaps even three figures, of these exceptional quality trout in this single pool, quite apart from all the smaller fish and the big grayling that I know were there.