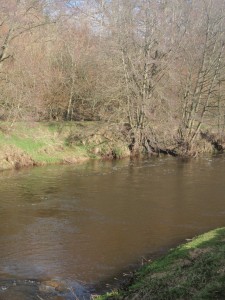 An incredible couple of hours on the Eden up at Sandford today.  The river has fallen away a lot: carrying a bit of colour, but less than I had expected.  Fished double nymph on the tenkara, with either a PTN or a Eurojig on point (with 3.5mm tungsten), and the pink-thoraxed Eurojig on dropper. Leader was as the last few sessions, at rod length (3.9m) with just over a metre tippet, which was Fulling Mill copolymer 0.147mm.  Outstanding control with this rig; actually better than is possible with the 10′ two weight and western-style.  The direct contact with the nymphs, with negligible apparent line sag, is startling.  The fish pick up the nymphs and give a surprisingly long hold-time… 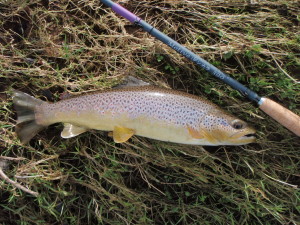 The trout were very active, though I did not see a single fish rise, with no dark olives hatching; but they are plump and, well, really in perfect condition.  They look like the trout of late spring, so they must have been feeding well over the very mild winter, in spite of the floods. This surely bodes well for the imminent opening of the trout season.  As I arrived I spooked some goosanders, which spoiled the mood slightly, though it was soon clear that these avian predators have not done any damage to the trout population of our river, at least to the adult fish, and it is rare that we see cormorants this high up river, possibly because we have a lot of fast water and tree-lined banks (where the farms have left them) which mercifully are not attractive to cormorants which prefer open sections of river (and still waters) which gives them good visibility and a clear, escape flight- path. 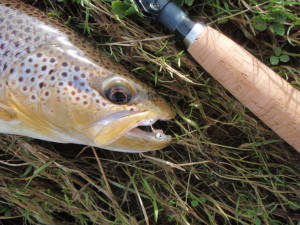 The dropper was generally the more effective pattern, as has been the case over the last month, on the flooded river, though it is absolutely essential to have the heavy tungsten point fly tripping along the river bed.  It helps having the dressings on jigs, which present point upwards.  The frequent hook-ups on the river bed are usually the bead being jammed between stones and nearly always these come away easily.  It is a delight to be fishing with the softness of a tenkara rod (which is a 6:4).  Just look at the sliver which is holding the trout above; even very lightly hooked fish like this can often be calmed and brought successfully to hand. 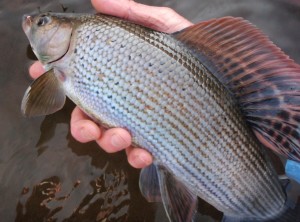 But then, from the depths of despair after so many weeks, months, without even sight of a flared dorsal, the merest hesitation in the flow of the Sunline section of the leader, and I tapped into what was, I thought, a good trout, surging off along the river bed.  There was something different about this one, though: it relit memories, the way it held on the floor, kiting into the current, making me turn and lean the long rod towards the bank. The fish held in the current for perhaps twenty seconds before I could ease it in downstream of my position, and I caught a glimpse of big dorsal.  What an overwhelmingly magical moment, as a minute or so later I eased the calmed fish to hand; a perfect Eden grayling – for me, one of the most valuable fish on the planet.  How many more are there out on upper Eden?  This is not the only one.  The goosanders and cormorants have not taken them all, and the farms have not poisoned all the rest.  Not quite yet. 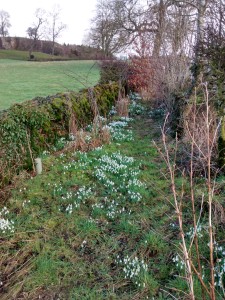 After the devastatingly wet winter we fly fishers are yearning for the spring and now there are very real signs that it is fast approaching.  It is already mild, but then it has been thus throughout the winter; but the day length is noticeably increasing and when the sun does shine it is glorious.  We have had little chance to fish the swollen Eden throughout the winter months, although in spite of the floods, the trout are obviously doing well: a typical short session after grayling almost always produces a few (out of season) trout, though we are very concerned now about the grayling which have essentially disappeared.  I personally have caught only six Eden grayling since last November, and only two of these were large fish. Several fishing friends have fared similarly, and some much worse, catching no grayling at all.  Almost everyone is blaming the goosanders (see recent posts), although I believe it is not as simple as this.  Anyway, we are all hopeful that when the waters finally subside and the spring spawning of this species is underway, we will see them on the shallow gravels as usual. Grayling can, after all, be miraculous in this way. 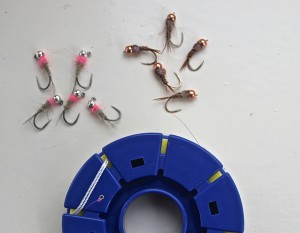 I have been fishing tenkara with a double nymph rig lately and have to report that it has been noticeably more effective – in the special conditions which prevail – than fishing a leader. The length of the rod helps (I have been using a 13′ Motive 390) because it allows one to stand off the back washes and eddies, or held-up sections of the right depth among the flood waters, and keep in almost straight line contact with the nymphs.  The ideal rig has been for a 4mm tungsten beaded nymph (PTN) to be on point, almost in a sacrificial role, with a silver 3.5mm jig pattern just 30cm up from this on a short dropper.  Almost every fish has taken the jig.  The leader is a custom-built hybrid (overall rod length) of 3.2m of 3.5mm fluorocarbon to 0.7m of 2.5mm Sunline fluorocarbon – available from Tenkara Times – with a one metre tippet of Fulling Mill Copolymer in 5X or 6X. 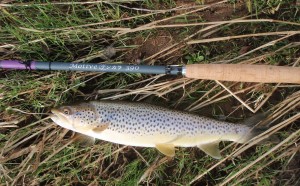 This worked so well today out on the Eden.  It was simply glorious to be out on the heavy water.  Skylarks rising, olives on the surface, snowdrops along the bank.  Hunted for grayling and could not find a single one; though five lovely trout, four on the jig and a single to the PTN on point.  It was magical. 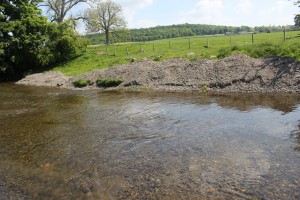 One finds very quickly in this age of a Britain dominated by agriculture that to fight the corner of conservation is all well and good, unless what is said and done amounts to any sort of negative comment or action towards farming. There are those of us who know the countryside, whose lives have been dominated by rural activities; fishermen, hunters, walkers, photographers, artists, scientists, ornithologists… There are a lot of us.  Apparently, our vote is not worth a lot, however, at least not if our voice clashes with the louder, overwhelmingly raucous shout of agriculture.  There is absolutely no doubt that intensive farming activity has completely wrecked the British landscape.  The comparative few have benefitted, while the taxpayer has fuelled the destruction; by paying for it.  The novelist Martin Amis once referred to the ‘bollocks of British countryside’, utterly in the context of what agriculture has done to it.  While it has been ‘politically-incorrect’ to refer to agriculture in these terms, and perhaps today it is almost taboo to speak thus, I for one completely oppose this submissive view.  Modern farming practice has been completely ruinous to the landscape, to wild habitat and to wildlife in Britain.  I am sick of seeing our once world famous wild trout rivers being degraded by agriculture. Catchment sensitive farming practice is laudable, for sure, but it is tiny, and wrapped in EU legislation, and, finally, again underpinned by the gullible European taxpayer.  There is a joke here in Cumbria, perhaps nationally, that if you want to avoid paying taxes, buy a farm.  I think that almost none of the taxpaying voters out there know that one.  A breath of rational reading: Click here.  How does this message transcend the taboos and penetrate the public mindset? 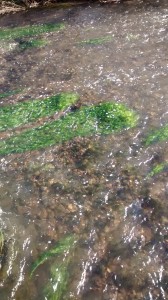 We walked by the Hoff Beck today. It is dropping away now after, not surprisingly, being in flood; though with more heavy rain expected tomorrow…  It was really spring-like out there; cool air, but the sun felt wonderful on our faces.  No silt up here, with the blast of water this winter carrying it all away, along with a lot of the farm-damaged banks.  There is, however, water crowfoot in abundance, as you can see from the photo.  Last year there were a lot of generally large (30cm+) wild trout in this beck, and even grayling, almost as far upstream as Rutter falls, where this photo was taken.  With the collapse in grayling population on the Eden, I doubt that we will find this species in the beck this year, although I am very hopeful for the trout. 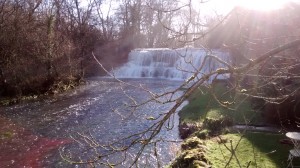 The water crowfoot helps the river in so many ways.  It stabilises the substrate, absorbs a lot of the run-off nitrate, which would otherwise fuel an algal bloom, and provides a purchase for all manner of invertebrates.  It is also cover for the trout and, in times of drought will substantially ‘hold-up’ the water in channels and small pools, providing invaluable habitat for the river wildlife.   This protected species is making a rapid come-back on this beck, which is recovering after decades of agricultural abuse.

Many anglers have been concerned by the apparent crash in the grayling population of the Eden, which is disturbingly mirroring what we have noticed on other northern rivers such as the Ure and Wharfe in Yorkshire.  Talking with my friend Stuart Minnikin (Yorkshire Dales Flyfishing) recently, he suggested that it is now a waste of time to fish for grayling on some of these rivers.  I don’t think that the Eden has become this desperate yet, but it is not far off, at least compared with the magnificent fish we were catching last winter, and previously.  Although I have not been out as much as previous winters, I have barely achieved double figures of good grayling (though dozens of out of season trout); these from the normally outstanding Appleby waters all the way down to Warwick Hall. There has been much speculation as to the reasons for the decline.  In recent years we have certainly witnessed a population explosion of goosanders, the prime prey for which are juvenile grayling.  Certainly this ties in with the observation that small – first and second year group – fish have been scarce recently, while the larger fish have seemed to be thriving.  Massive flooding has also been suggested as a cause for the decline.  Although we probably do not actually receive any more rainfall in Cumbria than hitherto, the agricultural drainage and damage of the landscape has manifestly been disastrous for the catchment, and the floods are much more extreme nowadays.  Silt and other agriculturally-produced pollutants are also much more noticeable.  Last spring, many dead and dying grayling were found with a fungal growth, just post-spawning, and the recency of this leads many of us to believe that this is the prime suspect.  The EA might deny that there is any problem whatsoever, but then the EA is a government department and the agricultural concerns throughout the country, and certainly within Cumbria, are so much more overwhelming than a few anglers’ concerns about any fish species.  Anyway, beyond the conspiracy theories, the fact of grayling decline on our northern rivers is real and current.  That being said, grayling are remarkable in their population dynamics, and can be extraordinarily capricious.  They are cyclic in the extreme, and we must hope that on Eden, and elsewhere, they will recover.