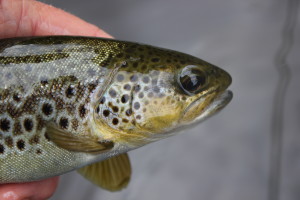 My longest period on the Eden this trout season, between trips to France and elsewhere in Europe, and we seem to be experiencing all the seasons within a few days.  Generally mild, though not really seasonally so, with plenty of rain and wind – usually downstream!  But it can also be glorious; calm with sunshine and the dazzle of colours of May-time England.  I have yet to experience what we refer to as a blizzard hatch, of any species, though the black gnats this year have been spectacular, and the trout have been gorging on these.  Hatches of the usual up-wing species have been reasonable, however, and as I write the danica mayflies are showing in good numbers, though, as usual, I have not seen a single one taken.  Right now, the trout are still on the gnats, and also taking hawthorns, while a pale watery species is also prevalent, and noticeably focused upon by the larger fish.  My own catches have been consistent with most others it seems, in that numbers are low, but the average size of the trout is very high, as last year.  Comparatively few juvenile trout are being caught, and practically no grayling whatsoever. 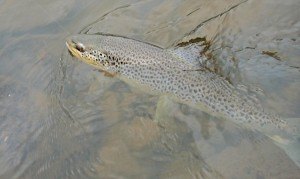 I have been down to Bongate weir a few times since the end of April, in the hope of seeing the grayling spawning here – on surely one of the most important grayling gravels of the entire middle river – and have been dismayed not to see any spawning, or indeed any grayling, even in good, clear water conditions.  No-one I have spoken to has reported seeing any grayling spawning in the usual places, and very few grayling have been caught.  This is alarming.  I have been trawling the network of Eden fly fishers and associations for information regarding grayling and invariably the feedback has been disappointing.  At best, the grayling population, for all year groups, has had a poor couple of years and this comparatively short-lived species, is simply at the bottom of its population cycle.  At worst, one or more issues affecting grayling are damaging the population, either directly by pollution or predation, or indirectly via habitat destruction.  It is rather likely, one suggests, that a whole range of factors are prevalent, because predatory bird numbers are very high throughout the Eden system, while habitat degradation is visibly so much more obvious in recent years with the vast intensification of both livestock and arable farming in the area. 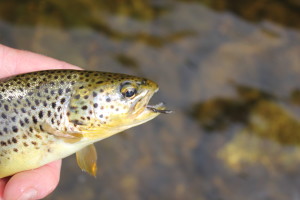 Tom Speak called me yesterday to tell me of a magnificent catch he had on the lower Eamont (PAA water), with over 30 trout (no grayling) on the plume tip.  He lost what he referred to as what would have been his personal best river brown trout too, which he estimated at well over four pounds in weight.  Mark Warman also got in touch to tell me of good catches of, again, brown trout in usual haunts on the main river.  Steven Dawson and Michael Edwards have been down to the new section of Appleby Anglers water at Ousenstands Bridge and have had some good trout, including the loss of another very large trout for Michael.  I have not yet had a three pounder this season on Eden, but have managed six fish over two pounds.  I visited the Winderwath section (PAA) with Tom a week ago – a place where I can usually find one or two exceptional fish, but was frustrated with just a single 32cm trout on the PTN, duo rig.  We saw only one fish rise in three hours!  So, it is contrasts at the moment; but certainly worth a visit, because in anything of a hatch or windfall, these big wild trout are breathtaking, and there is still the potential on Eden for the best fishing in England for genuinely wild trout, on such a large scale. 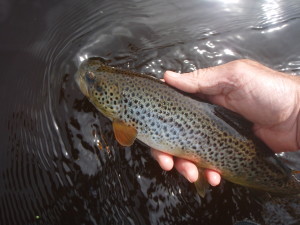 Typically, just after writing the above I have just been down to the new AA water, the King’s Arms stretch around Ousenstands, and caught a dozen small trout along with a couple of larger fish.  There were masses of upwings, including danicas, and fish rising on and off the foam lanes.  All fish came to a yellow quill plume tip, size 17.  There is a huge population of trout on this stretch, and it is certainly a welcome addition to the Association’s list of Eden sections. 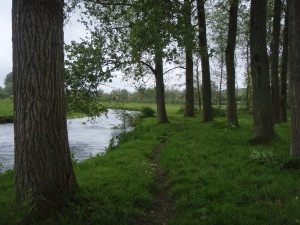 I have just returned from a week in France, with Lawrence and Neil, fishing the chalk streams of l’Artois region, mainly l’Aa itself, which has overwhelmed me. L’Aa is a classic chalk stream in every way, running clear even after very prolonged heavy rain (which we experienced); a sign of a vast, undamaged chalk plateau.  This river, in common with all in the region, is generally very challenging. Considerable environmental work is being undertaken, in a program running from 2007-2016, on the river and its environs, and this is entirely focussed on improving the habitat for the natural diversity of species present, including brown trout and grayling, and not for the direct benefit the fisherman.  The banks are largely crowded with trees – alder, willow, poplar – and the fly fisher is usually frustrated by these in the never-ending search for a clear cast.  Wading is allowed in some sections, at some times of the season, although it is usually best to keep out of the water and seek cover on the bank.

In three sessions on different sections of the Aa, at Renty, Fauquembergues and Ouve Wirquin, I caught six trout, three on plume tips and three on various nymphs.  The trout ranged from 30cm to 45cm, the latter of which was over two pounds in weight.  They were all magnificent fish.  Lawrence caught a single trout in the last session and this fish was among the most beautiful chalk stream fish we have seen and somewhere around two and a half pounds in weight.  We experienced hatches of various up-wings, dominated by a pale watery species, although dry fly was hugely disadvantaged by the omnipresent downstream wind we endured. 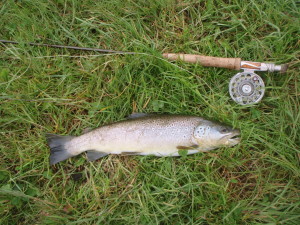 There are grayling in the Aa, revered locally, although we did not catch any.  Neil saw a large one on the Renty water, but it was, typically, in an ‘impossible’ lie and he spooked it while attempting a cast. One of the fish I rose and pricked might also have been a grayling, but in any case, les ombres remain elusive to me, although with the exceptional, and enormously demanding trout, the region, and particularly this river, has become my favourite place in the fishing world.  It has absolutely everything I adore about fly fishing, on a large scale of river variety, among a fishing fraternity that is so proud of the conservation work being accomplished.  And I have still barely scratched the surface of possibilities.  My friends and I feel like pioneering pecheurs avec les mouches.

Opening of May and it suddenly feels more like we are back in March up here on the Eden.  The river has been magnificent for about the last week, in the mild weather, with enormous numbers of black gnats and midges that seem to have brought every fish in the river to the surface.  Various upwing species are also trickling off, and certainly also taken by the trout, while there have been countless grannom about, although I haven’t seen a single one of these taken!  Such a contrast with earlier in April, and before this, when even during reasonable LDO hatches there seemed to be so few trout, with the few fish caught coming to the nymph.  For the last few days, my catch rate has rocketed, from one fish an hour on the nymph, up to six an hour on dry fly (plume tip).  Best fly has been the 19 heron herl plume tip, although the black F-fly style plume tip (21) has been effective during the peak of the black gnat activity (which is very early this year – normally being associated with June). 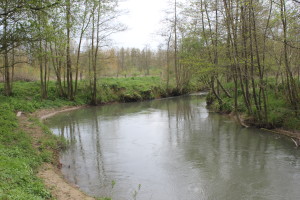 Lawrence, Neil and I are now ready for our next trip to l’Artois and certainly counting off the days, even though the fishing on Eden is so good.  We have the prospect of the hatches really developing on the chalk streams there (on my last trip in mid-April, the surface fly activity was just as it was at that time on the Eden – negligible), which should bring the trout up and give us some specific targets rather than having to rely, as last time, on the more prospective nymph approach.  Friends tell me that trout are indeed rising now on la Ternoise, while I have a personal goal of catching one or two of the elusive grayling (l’ombre) on l’Aa.  This species is more revered in northern France than even the wild brown trout (la truite fario sauvage), and there is a strict catch and release policy.