Because I have been away, I have hardly fished the Eden since the spring, but have done so this past week, the first after the close of the trout season, as grayling come to their best. 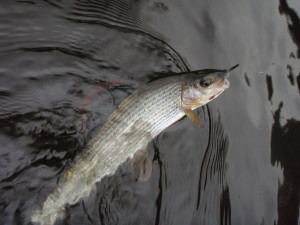 Delighted that the prospects seem so good. In the mild weather, last week’s hatches (mostly of pale wateries, and some BWO) were immense with both OOS trout and grayling up at them relentlessly. Suddenly, after the rather disturbing reports from spring and summer time, the numbers of both species seem to be much, much higher than we had thought, at least on the upper river (upstream of Penrith). The Appleby waters seem particularly to be graced with large populations, mostly of 20 – 35cm fish (both species). This is the Eden at Holme Farm, from mid-stream, looking towards a storm over the north Pennines. 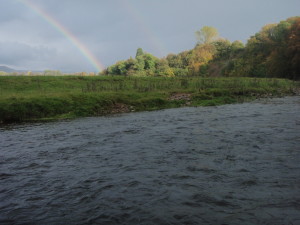 Occasional very large trout are being reported, with the best I have heard of coming to Steven Dawson, with a 4lb trout at Colby Laithes. I have also heard of a huge grayling, possibly in excess of 3lbs up at Sandford.  My best of last week was a 40cm trout, and a 38cm grayling; all fish coming to plume tips, size 19, though the numbers have been almost ridiculous. Fish are rising continuously from the very beginning of the hatch, at about lunch time, through to whenever I have left the water.  Trout have outnumbered grayling, but this is always the case because of their much more aggressive feeding nature. 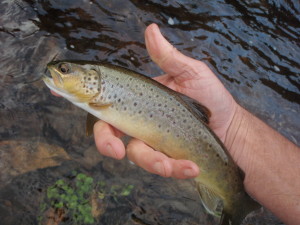 I have no doubt that in some locations around Appleby, grayling considerably outnumber trout, but the delicate, efficient feeding of the grayling, locked in a feeding rhythm and position, makes it much more difficult to bring to the fly – though a sparse plume tip, as always, completely changes the odds! When the weather finally turns cold there will be plenty of chance for nymph fishing and I shall certainly, as last year, be using the tenkara approach with either Duo, single nymph or double nymph – and I am rather looking forward to this. 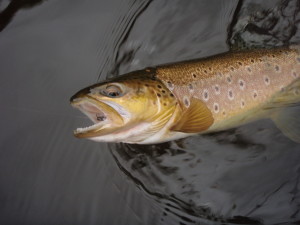 With the dry fly mayhem lately – similar to what we experienced lately in Slovakia and Poland – one really has to start questioning what on earth we are doing out on the river, and surely yearn for fresh challenge.

The fly fishing treasures of Europe never cease to amaze. I have just returned from a trip with friends (Wojtek, Tom, Paul, Sue, Gavin, Neil, Alain and Lawrence) which, while ending on the awesome San river in Poland, took in a few magical days in the Slovakian Tatra mountains fishing the Váh system. 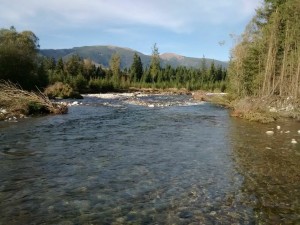 The contrast between the ghastly architecture and human intimidation of the larger towns and cities, and the pristine rivers of the region was extreme, and the fishing was beyond everything I had expected. The Tatras are stunningly beautiful and the waters running off the forested slopes have that alpine purity. Under sun-light, the rivers are disarming, because of their clarity. One can walk for miles and not see a single fish, unless they are rising. It is miraculous, how they can hide, because we all caught large numbers of both brown trout and grayling, and observed rises that were breathtaking.

On the confluence pool of the Belá and the Váh, Lawrence, Neil and I (and later Sue joined us) experienced a rise of grayling, to pale wateries (typically they were ignoring the numerous caddis) that is very difficult to describe. In a one hundred metre length of river, consisting of a stagger of pools and glides, we estimated that there must have been several thousand grayling! 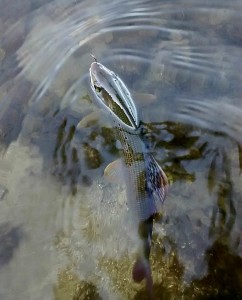 In one period during the rise, which lasted at high intensity for three hours, I watched the whole area of river while Lawrence and Neil fished, and must have seen over a hundred rises in a single glance.

I had a lovely day when Wojtek and Alain drove me to numerous little tributaries of the Vah, from each of which I caught some trout, and sometimes grayling, before moving on to the next. I think we were all astonished at the fly fishing potential here – which is vast. 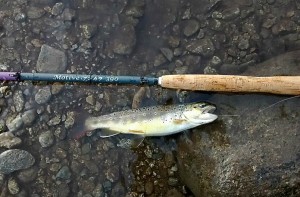 One had heard about Slovakian fishing being ruined by cormorant predation, but this is simply not the case.  All age ranges of grayling are present, as of trout, and in enormous numbers, on every river we fished.

One word of warning: we stopped by to have a look at the tailwater section below the dam on Lake Liptovsky. This is probably the most tourist-attracting fishing in Slovakia, but also by far and away the least interesting.  It is entirely artificial, and maintained by immense stocking, of all species, including rainbows. It is also dangerously unstable in terms of flow rate, with millions of litres of water being released (with no warning) during the periods of high energy demand. Except for one short no kill section close to the dam, there is also considerable bait fishing here. The visiting fly fisher should really make the effort to find the fishing in the bountiful rivers upstream of the lake, and the tributaries of the Váh elsewhere.

You will need a state fishing licence and the only complication is finding the individual river permits. One’s hotel should be able to help with this, so if you are interested, I can certainly recommend the hotel Liptovsky Dvor in the village of Liptovsky Ján, close to the upper Váh. 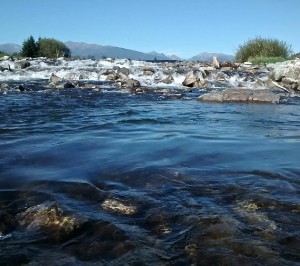 All my companions fished a mixture of nymph and dry fly techniques, and Tom and Paul in particular did well with the nymph. I stuck to dry fly throughout, mostly with plume tips, though occasionally on the roughest water a championship caddis. Even during periods of minimal hatch activity, the trout rose freely to the plume tip, and during hatches – which were very prolonged – only the dry fly would work for the grayling.