So it has seemed. Outstanding, really; probably the best in memory. I have heard reports from all over Britain, of fabulous grayling catches, with many notable specimens, even those fish over the 50cm mark, which is truly astonishing for British grayling. I have not been out quite 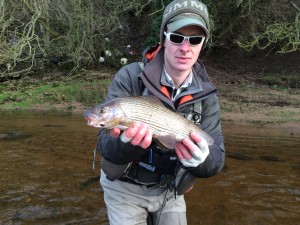 as much as most winters, because I have been spending as much time as I can in France, where the 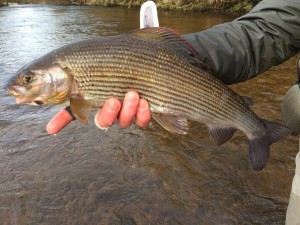 season is closed, but when I have been out, on the Welsh Dee or Cumbrian Eden, I have been surprised by the numbers of grayling, and I have managed several over the 40cm mark, though the true giants have evaded me so far. Anyway, there is still another two months of the season to go and I don’t see any reason why this spectacular period of fishing should end, notwithstanding flooded rivers or possible deep cold to come. It is not that I think there are particularly more grayling about nowadays. Indeed, I think some rivers, such as the Eden, are in decline. I suspect that it is the ‘visibility’ of the catches nowadays. There are more really very good grayling fly fishers out there now, way more than ever before, and many, if not most, of these like to broadcast their catches wherever possible. This extends to the social media, like Facebook, and many of us are just a little sick of all the ‘grinning idiot with big fish’ pics that abound (and of which most of us have been guilty in the past). If only these anglers knew the damage they were doing! It is easy just to snap a photo of the fish in the water, as it is brought to hand or net, or perhaps to quickly do the same while lifting the fish gently above the surface as it is being returned. Then, no damage, nice record of fish, and all is well with the fishing world, and we don’t have to see repeated images of the grinning angler with his trophy. Not too much to ask? The pic here, of a 48cm hen fish caught recently on Eden by Tom Speak, is exemplar. I took the photos, saw Tom, net and unhook the fish, and it was out of the water for 10 seconds. I have no doubt whatsoever that it survived the experience, and it will probably be caught again, even before it spawns in April. I also made sure Tom didn’t grin until the fish was swimming away into the cold Eden waters.

I have mostly been fishing tenkara with double nymph rig, usually jig patterns. Though pictured here is the outstanding ‘leggy’ PTN with another Eden grayling. 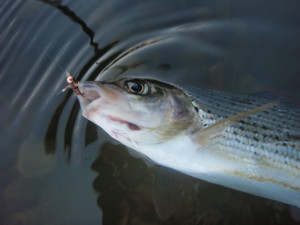 Winter grayling fishing utterly lends itself to tenkara, even for the very big grayling that so many rivers are yielding this season. Grayling do not run fast or far, like trout can, so there is no problem with the fixed line. I actually feel that grayling are a more suitable target species than are trout, at least on a large river, for this technique. I have only very rarely felt the need to yield line, even to a big grayling. The long, soft tenkara rod is perfectly capable of absorbing the lunge of a big grayling, with the assistance perhaps of a few downstream steps by the wading angler. The comparatively mild weather this winter has also helped to entice us out on the river. 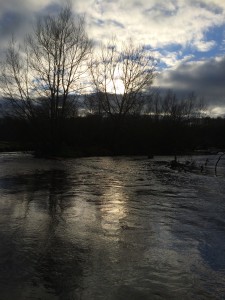 Some days it has felt like spring, and Eden remains a very beautiful place to be.

Show season starts soon. It begins with Charleroi, Belgium, at the end of this month. Then, on the first full weekend of February, we have the BFFI at the Stafford show-ground. I will be at both these great shows this year, so if you are too, please come and find me. I will be on the PolishQuills stand, but no doubt also wandering around catching up with old friends. Do come and see the new PolishRods; ultra-modern technology married with classic quality – the most delightful small river rods ever made.

I can’t wait to try one of these,  just as soon as the season opens on the French chalk streams.