It has been the best winter for grayling fishing in the memory of almost everyone I have spoken to, with large numbers or exceptionally big fish being caught throughout the English, Scottish and Welsh rivers where this species exists. Two weeks ago I was watching grayling on the Aa, in northern France, apparently collecting already for spawning,

while trout were on the shallows, nymphing away as if spring was already well established; as so it seems so far south. On Eden in Cumbria, it is rather different, of course, and the river is currently an inhospitable place. When lower, however, the fishing has been incredible on the Appleby waters, with an encouraging number of grayling and even OOS trout eager for the nymph. 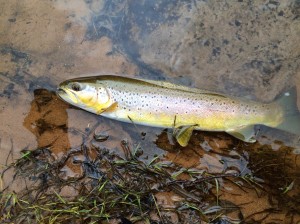 I have fished exclusively with tenkara and double nymph, through the winter, and while I am certainly looking forward to the opening of the trout season, I have been so impressed by the grayling fishing, astonished by just how perfect the tenkara presentation is for this species, even on a big river. 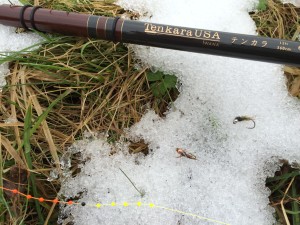 Yes, I have had some anxious moments when substantial trout have been hooked, but I have broken only once, and I think this was down to a hurried knot – to my chagrin! So long as you don’t succumb to being ‘flat-lined’, when you are more or less pointing the rod at a big, running fish, it is remarkable how the long, soft tenkara rod, and sometimes a bit of nifty wading, can absorb those dashes of even quite large trout.

There are barely two weeks to go, as I write this, before the new (brown trout) season, both in England and France, and wonderful though this winter has been for the grayling, almost all of us are now more than ready for longer, warmer days and increasing chance of dry fly action. 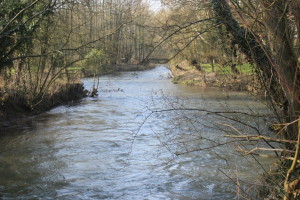 I shall be spending my time between the French chalk streams and the rivers of north west England, but am delighted to have the prospect, also, of a trip with pals to the Massif Central in July. This is a region I have long wanted to fish, having previously only passed through it and having been told that it has probably the best fishing in France. We shall be fishing in the Allier and upper reaches of the Loire, and among the countless feeder streams  of this beautiful region. It will be fascinating to see how it compares with the chalk streams.  I suspect that rather than being better or worse than other regions, it will have its own character. Nice though, that it has a mixture of trout and grayling, as well as some unusual salmonid species.

We have noticed that the trout have remained active throughout the winter, probably because of the comparatively mild conditions. Some days even in January were spring-like in the Artois, and we often saw trout darting off the shallows as we approached the river bank, particularly in the Aa and the Planquette, when the water was fairly low, and clear. 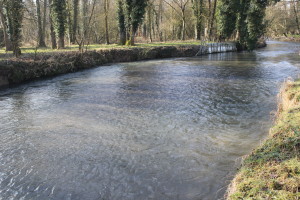 Last week I even saw some grayling on the Aa, apparently already shoaling for spawning. If this is so it is at least six weeks earlier than we usually expect.

Along with the fantastic grayling fishing this winter has been a proliferation of the notorious ‘grinning idiot holding trophy’ shot. Without a doubt the standard of contemporary river fly fishers is generally very high and a lot of big trout and grayling are now being caught; but it is an unfortunate manifestation of the human condition that we feel the need to show off our prize captures to our fellow anglers. Modern phone/camera technology has made this all too easy. One wonders, though, if it was really understood just how much damage we do during this process if we might see an end to this fad, and then to see a more environmentally-sensitive type of display.  Taking a fish, freshly caught, out of the water for any appreciable period of time is physiologically catastrophic. Incorrect handling can and often does incur profound damage, particularly to the heart and swim bladder. 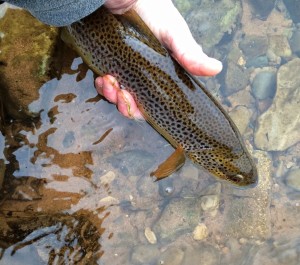 Trout, cradled in the flow before its release, with no compression with the grip.

We have all been guilty of returning fish, after this handling and photographing fiasco, and watching the fish swim slowly away, knowing that actually, even though the fish is alive at that moment, some hours later it will die. And I think this is a serious problem in the sport. Catch and Release is viable, and justifiable, only if it is successful with a very high survival rate. That is sustainability, and trophy shots do not really have a place in this, unless they demonstrate a careful approach and attitude to the release process. On the river, at least, we have come a long way, with barbless hooks now the norm; but we urgently need to re-assess the rest of the catch and release process, even if this forsakes our smiling visage in background. The trout and grayling at the top of this post were not touched at all, merely calmed, brought to rest in the shallows for the fly to be turned free.