Fascinating, testy and hugely rewarding fishing here on the chalk streams. Lots of surprises among new places and old; seemingly boundless possibilities on a vast network of beautiful streams running off the Artois chalk plateau. Lawrence and Neil had the most difficult week in terms of the weather and lack of fly hatches, though Neil did manage his first trout off the Ternoise (which is a great result), and a big grayling 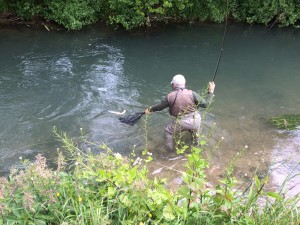 on the Aa, while Lawrence caught three superb wild trout on the Aa at St Martin d’Hardinghem. We also visited the fly only no kill sector of la Course on the parcours fédéral section, which was a joy to see and fish. More perfect chalk stream habitat than this does not exist (except maybe on the Aa) 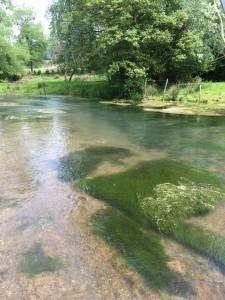 and one wishes that there was more available for public access than this 500m section (among 15km). I caught one trout here and stalked another which I rose three times, though only the first time did it momentarily mouth the fly – even a 21 plume tip! 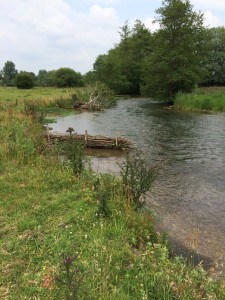 Jerome and Malcolm struggled on the Ternoise, but found trout and grayling on the Aa at Ouve Wirquin and Renty before having a superb session on the Lys at Coyecques with several 15″ wild trout.Hatches steadily improved during their stay, although nymph predominated, with the 2.4mm tungsten beaded PTN being as reliable as ever, particularly on a duo rig under an Oppo. This has been an excellent searching tactic while the hatches have been slow, and I have had several trout come up to the Oppo while prospecting in this way, though more have taken the PTN. These two fly fishers adjusted their pace and approach until they were pretty well tuned into the sections visited and as a result their catches improved, with superb results off the Aa at Ouve Wirquin and Renty, including a few big grayling, 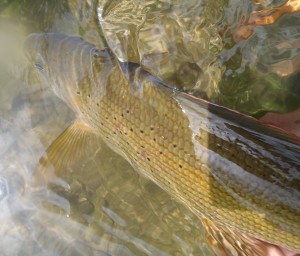 and then a magnificent day on the Lys, where Malcolm fished ‘jungle water’ with a short rod to search out those superb brownies.

Hatches steadily improved, with upwings dominating, particularly pale wateries, medium olives, iron blues and some localised danica mayflies. These rivers are not as silted as most English equivalents, so danica mayflies, which are silt loving species, are not as abundant. Even so, none of us saw a single mayfly taken by a trout (though they all seemed to be taken by wagtails!). The smaller upwings always brought fish to the surface, however, with the result of dry fly success picking up by the time Luke and James arrived at Tilly. 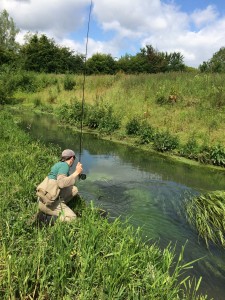 And how these two anglers adjusted! I started them off on the Aa at Ouve Wirquin where Luke in particular (fishing upstream of James) caught both trout and grayling steadily through the day. I followed this with a (almost compulsory) visit to the Ternoise, fairly high up river at Hernicourt, where Luke caught three lovely wild trout, 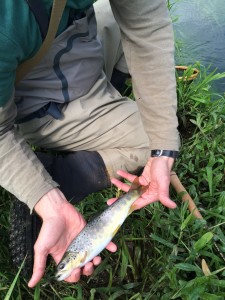 and James two (and also lost another very large fish which dashed into tree roots on the far bank). A return to the Aa at Wavrans saw both these outstanding young fly fishers into fish on both nymph and dry fly, finishing the day with seven each in a mixed trout and grayling catch. They were superb ambassadors as English fishermen, and several local anglers were astonished by their skills and what they managed to catch (and return). 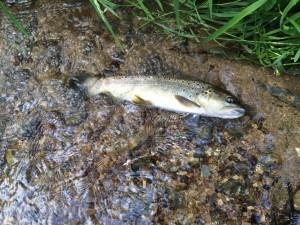 One angler told me he had rarely seen such skill with a fly rod, which is some accolade when you consider that French internationals practice here! I wish more of the English got this.

Keith, Jacques and Theo arrived then to fish three different sections of the Aa, one on the upper Canche and one on the Ternoise. Keith chalked up almost unprecedented numbers, while Jacques and Theo adopted a more considered, slow moving approach and caught steadily enough, again with both nymph and dry fly (though the balance was to the nymph, probably because of the sunny conditions which surpressed the upwing hatches for much of each day). 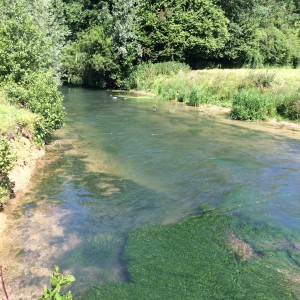 Theo finished the trip nicely with a big grayling on the Aa at Renty, a PB for him, and at 47cm, a huge fish by any measure. I have been fortunate to witness great fly fishing in my life, in marvellous locations, but this month has been up there with the best, perhaps largely because so many excellent fly fishers have experienced something which is surely close to the pinnacle of what is possible, hidden away here in northern France, reminiscent of the fishing on the southern English chalk, now ruined by abstraction, agriculture and commercial management. 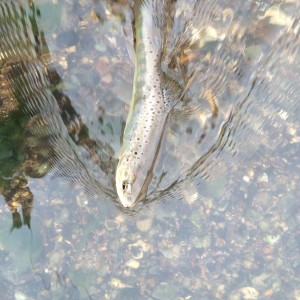 It lifts one’s game here, if the basic skills are in place, and this is much more unlikely, if not impossible on most English rivers.

While my friends fished, I managed to sneak out for short sessions, mostly on Ternoise near the house. I was able to choose my moments. I used the Streamflex 10′ #2 along with Tom Bell’s (Sunray) revolutionary WCN line, tipped by two metres of 6X and a plume tip.

BWO and pale wateries hatched, inevitably bringing the trout up at them. On water where most anglers are usually convinced might hold just a very few fish, I caught 15 during these brief visits. No cleverness in the numbers – as I said, I chose my moments and chose my water – but what it showed me, at least, is what I consider as the ultimate refinement in our sport. I simply cannot see how it could be better. The plume tip drifts there, as one of the flow of flies, with zero disturbance from the line. 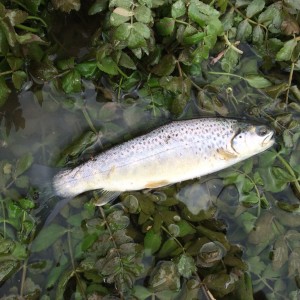 I mean, in a month, the only fish to reject was the above mentioned on la Course! Does this make the point?