Off the grid a while now, with various pals in the north of France, living the dream, before it collapses. And it will collapse. The fishing has been fascinating, as always here. Almost always challenging, but, well, it takes the breath away, because it is real. The ridiculously artificial English fisheries fade in the mind’s eye – though, in truth, I am looking forward to the autumn grayling on Eden. But Eden is almost the last of it, the last of any river of natural consequence in what passes for rural England. We all know it. You know it. The last few days I have been so, so fortunate, through the kindness of my friend Jean-François, to fish a private, protected beat of L’Aa. This is JF playing with a very happy Ellie. 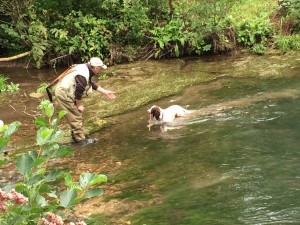 Here I have discovered paradise and, really, been vaulted back in memory space to the southern English chalk of four decades ago, before it was wrecked by commercialism, agriculture and abstraction. The Aa is the perfect storm among chalk streams, and this section is the cream of it, up and downstream of an old, crumbling mill 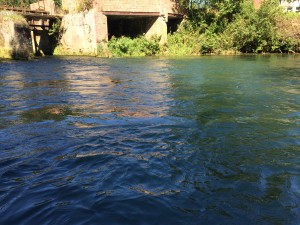 where the clear waters first hold up in a long glide, then dash, glittering, to the mill race, split into a carrier and mainstream, thundering, in part, over the sluice, down into the perfect grayling seam, and on down to the waters’ meet and channelled on into Association water, where you and I can fish for near to nothing Euros each day, on wild waters that match the Itchen of old and where we learn the real thrill of fly fishing which is now impossible on the Itchen nouvelle even at a cost of €2000 a day.  Something has gone wrong there, but we all know that too. 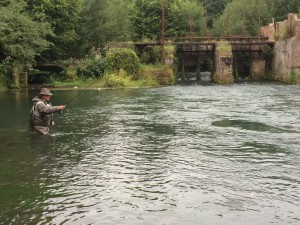 What we, in England, have lost, is numbing, and of course we have only ourselves to blame, because we have failed to protect the only really valuable natural resource we have, and we have to come to rural continental Europe to recognise it, because it is still here.

Being undamaged chalk, the streams hereabouts always flow clear and cold, and away from some of the association waters that are stocked, are in the main part entirely wild (though don’t scorn the prolific (AAPPMA) association waters, which are very lightly stocked and all hold wild trout, and sometimes grayling, 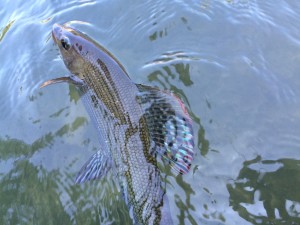 and are never manicured to a vestige of their natural states so as to make your casting easier). It’s not bitterness, because I don’t care anymore, here in France, but it is regret, because we had it all in England, maybe throughout the last century.

I really enjoyed seeing all the reactions of visitors to the various streams hereabouts. Gavin Walsh was stunning; a true hunter/fly fisher, who caught an unprecedented seven magnificent trout from la Ternoise, up and downstream of the house. This one was among them: typical, almost sea-trout qualities of the beautiful Ternoise fish: 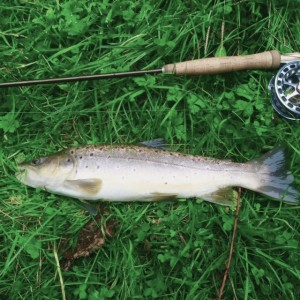 When he came back home I could hardly believe what I was hearing of his incredible day. Seven, that’s not possible on Ternoise. I have twice caught six, but these in sessions during blue winged olives hatches, and at other times been happy with one or two and to avoid the blank! French internationals walk off here with less.

I fished a few short sessions in my new-found paradise, with Tom Bell’s line and the Streamflex, both two weights, along with Tom Speak’s fly. There is a seam beneath the old mill and are there thirty fish like this on that seam? Maybe more. It doesn’t get better, anywhere, on the chalk. 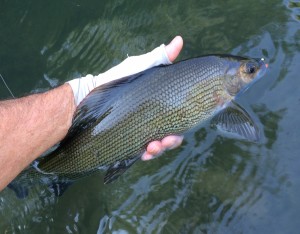 What a season it has been; for me, mostly in France, though with a fabulous period during the spring on the Eden and feeders, along with Lawrence and Neil, and some particularly big trout. But it has been an eye-opener too; absorbing some of the contrast between the state of English rivers and those on the continent. Indeed, on returning to Cumbria, one of the first things I hear is of a slurry ‘spill’ on the Dacre beck, with massive fish kill and the usual EA reaction of taking extreme care not to upset the farmers. Pathetic, and quite simply wrong. Our children are going to look back on this and judge us. Were we really so weak? There’s the collapse, right there.