Almost a month after the category one (trout) season closure in France, I had to visit the magnificent San River. I just had to; you know how it is! Three days on wildly different sections – only three days, but, well maybe it’s enough to re-establish a perspective. First off, after a sleepless night and the pulverising journey, and Wojtek sent me down to my old haunt on the wilderness waters down at the islands at Załuz – yes, he actually sent me down there, by myself – there, on a braided river section that made me feel like I was the only person to have fished there this year. 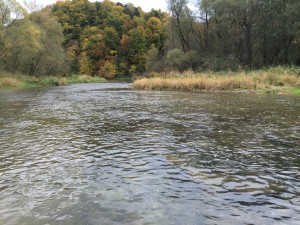 Blistering numbers of trout, with grayling among them, all whipping away the Oppo (what a great ‘go to’ fly this is, when you just don’t know, and can’t see too many up-wings). 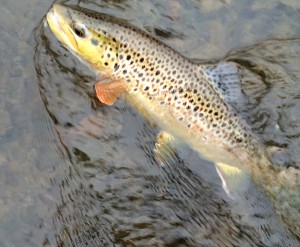 Only two hours, or perhaps it was three, and I was back; back on the most intimidating, frightening gash of forest-banked river in eastern Europe. Some say it’s where I belong. Some say this is where good fly fishers become great fly fishers. 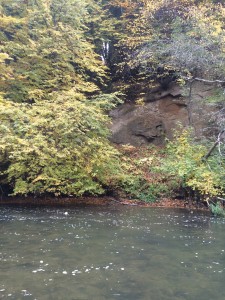 I was entranced. Again. Started with duo – Oppo and PTN. Oh come on. I should know better by now, right? You really don’t need this. So I ripped off the PTN after the first few fish nailed the dry and just waded where whim dictated. Every little hollow, scoop, ‘held-up’ water on the foam lines… The fish were there. Where I thought there might be a trout, there were three, and then a grayling. 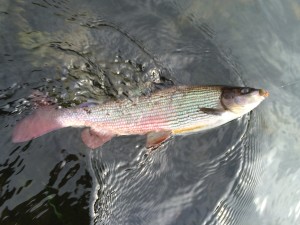 So, next day, I was sociable and joined my pals, Jérôme, Lisa, Philippa, Tom, and Wojtek. We fished about a kilometre upstream of Baclava. Slow start with an Oppo, although at about noon the BWO appeared and first the trout, then the grayling rose relentlessly, for several hours. The XF2+ three weight, along with a Sunray PL, and just 5′ of tippet – yes, that’s all you need on these remarkable lines – and the plume tip. As I’ve said before; the ultimate refinement. I won’t bore you with loads of ‘grip and grin’ photos, and tales of immense numbers of fish, of which most of us are completely numbed and dumbed, BUT, the San is so completely exceptional. It is more than Europe’s premier fly fishing river, on an enormous scale. It should be regarded as a model for how all large rivers can be, if human exploitation is kept under control. You know what I mean. And to be here, with Wojtek and other friends, in a BWO hatch… 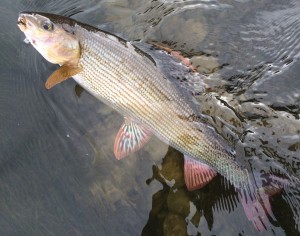 On my last day, we went out on the island water near Zwierzin. It was raining, heavily, as it can in Poland! after 30 minutes the water was running in under my coat into the top of my waders! I fished the smaller split of river by the islands on the right bank. 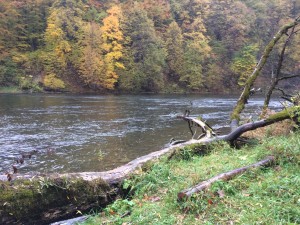 This is a place that always surprises – a mostly shallow, gravel-bedded glide, interspersed with islets, foam lines and run-ins – and always, it seems, occupied by both trout and grayling, much larger and numerous than one would expect. In the heavy rain, the only fly I could keep afloat, and that I could see, was the Oppo, and as a consequence, all I caught were trout, but there were some beauties among them. 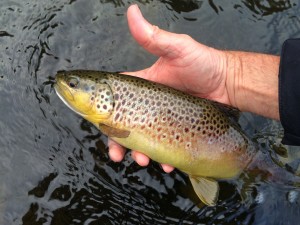 It was fascinating watching the feeding dynamics, and yet another surprise to see both trout and grayling rising off the prime feeding areas of the foam lines -wherever there were blue winged olives, of course. I even watched bow-waving going on, not a rod’s distance from me, as big browns careered through the minnows and yearling grayling. Then, though, I was blessed. The rain relented and instantly there were BWO in the air again. Off with the Oppo and on with the plume tip; graced with two hours by myself (all the others were fishing upstream or the other side of the big island) and able to focus on big grayling. Gone was the horrible cold. I was almost oblivious to the wet waders, now actually warming from body heat. I watched as the feeding stations became defined. I properly engaged the river. I didn’t even notice Tom and Wojtek returning from upstream, watching me from 100 metres away. Almost every fish shown the plume tip, sipped it away, and not a single one of them was under 35cm. Finally, just upstream of the largest islet in the chain, I came up on a foam-flecked run, hard against a tangle of tree roots on the bank. There were rises the full length of it, and to either side, and they were obviously big fish, all grayling. I began catching them at random, just with casts on the near side of the foam lane, then targeting individual fish. 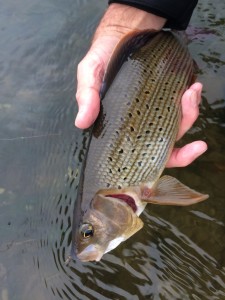 Oddly, almost every fish was a little larger than the one before, and they had started in the region of 40cm! As I was playing a fish close to 50cm, I noticed another rising, in a ‘protected’ drift lane close to the roots. This one had to be targeted and it was rather difficult to place the fly such that it had enough drift upstream of the fish. Three attempts brought no response, but then I noticed that many naturals were also drifting by, untaken. The next drift was right in terms of both timing and position and the plume tip was kissed away. The fish immediately came out in the river towards me, and very close to the surface. It was vast for this species, probably the biggest grayling I have ever hooked, possibly over the 60cm mark. It did not hold in mid-river. I saw the sweep of dorsal and the thick bronzed body turn towards the roots and in the moment that the fish found sanctuary the tippet broke (the only time in three days that I broke on a fish). I would so like to have seen that fish clearly.

They were, though, still rising. Actually, I estimated that there were in excess of 20 big grayling just within a cast of a seven metre drift of river; the perfect storm of grayling lies. Three casts after the loss of the huge fish, the plume tip disappeared again and another large fish was hooked. Again it came out towards me, before hanging in the fast flow. This time I waded quickly downstream – easy on the gravel – and held the fish up from me. It came down with the flow, and in towards the bank, just down from the roots, though obviously intending to reach their sanctuary. I was so positioned, below the fish in fast water, that I could reach in beneath his belly and slide him up onto the reed grass. I threw my rod down and fired of a quick photo (I know it looks like it was posed, but it wasn’t) before easing him back into the river. He immediately shot up into those roots. I think he had less than 15 seconds of air time. 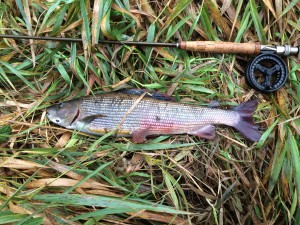 The rod handle is 28cm. I estimate the fish at 55cm. It was almost small compared with the giant I had lost three casts earlier. I hate trophy pics, really loathe them. They tell us more just what egotistical idiots we are than anything else. I just got lucky here in that I could easily slide him up on the grass almost in the same motion as reaching for the camera. Anyway, it is the San that does it all; the most remarkable mixed trout and grayling fly fishery that exists, anywhere. Lisa also managed a 55cm grayling that week, and also lost one she estimated at over 60cm. Wojtek also caught several very large grayling, while Jérôme had a scatter of stunning browns. It is the San. And the presentation line and plume tip.