It is a month now since the huge floods and I have been out a few times, searching for surviving grayling. A great amount of damage has been done, almost exclusively where trees have been previously removed in a misguided, and horrifically common, attempt by the land-owner to acquire a little more grazing and access to the river for sheep and cattle. The banks in such places have been massively eroded and scoured. All the resulting silt has been swept downstream to collect in the lower river (calling for the ubiquitous requests for the river to be dredged) and the Solway. I have caught on each occasion I have been out, but this has been exclusively of big fish (the smallest was a 33cm grayling). 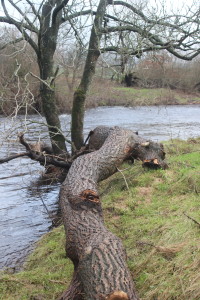 There remains concern about the damage to the juvenile fish population of both species. I have heard that a lot of dead fish, and crayfish, have been found in a few locations, principally on fields that were flooded around Appleby. We suspect, therefore, that catches this year might be a little lean compared with the last few years, although some fish of exceptional size should feature – and these fish will spawn, of course.  So too will it rain heavily again, to produce an increasing number of floods. With climate change and upstream catchment destruction (which has been catastrophic) of the Eden, all that water is going to produce long-term instability resulting in habitat (and flooding) problems. We will get used to it, I guess, and more importantly, so mostly will the wildlife, which will adapt to the new rhythm of altered nature. It is either that or repair and recovery via massive reforestation of the denuded uplands, and we all know that is not going to happen. The Eden, though, is a miracle on the English scale of things. 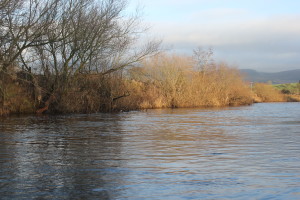 I know I have said this before, though I hope not ad nauseam, but the entire system is so large that it (or rather the wildlife) has managed to adapt such that it remains one of England’s finest natural spaces, albeit altered by, particularly, the last four decades of human activity (aka farming); but then where in this over-crowded country has escaped any better?

While I have seen large dark olives on each occasion, I have only seen two rises (on the same day while out with Stuart Minnikin) and it has been the nymph that has caught the fish, which is no surprise. Western-style, with the 10′ Streamflex and Sunray PL two weight, or tenkara with the 3.9m Motive, has made no difference with a double nymph rig. Though actually, the tenkara is simpler while affording better control, as typical for winter grayling, so I have leaned towards this. As the days lengthen and we creep into the trout season, however, that will change. The ultimate refinement of the 10′ two weight, with PL line, is frankly unbeatable, particularly with dry fly at range (>10m) and big, fast moving brown trout. But for now it’s double nymph at short range and the grayling, and a few out-of-season trout. 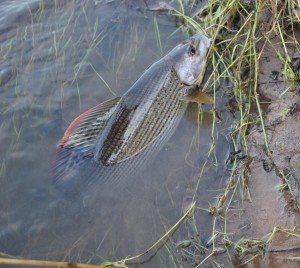 They are extremely localised, with long sections of river apparently devoid, although this is often the way in winter. I am looking forward now to exploring farther downstream, which because of the increasing force of water might be expected to have been more damaged. I hope we find grayling there, and trout when the new season opens in late March. Even before, because if the trout are feeding, well post-spawning as they are, this is a good indication of the health of the population. With trout like this, at least in the upper river, there is hope (caught high upstream on 13th Jan): 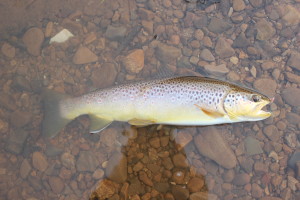 Still two months to go before the new trout season, although we hardly miss it with good grayling fishing, which we have. I think it is the dry fly fishing that most of us miss the most, and this will surely come. I always find myself thinking about this a lot as the winter wears on; there comes that moment when we notice that there are way more rises than usual, or just more olives on the surface, when we suddenly have the need, the overwhelming urge, to change the duo rig, or nymph rig, and replace it with the simplicity of a plume tip and let it drift down the foam lane… From that moment on, usually some time in early April, if not March, we know that the fish, both species, are spending an ever-increasing time looking upwards towards the light and the surface, and hatching flies. We all, well most of us, can enjoy the winter with nymph, and the beautiful grayling, but we live for the long, long season of dry fly. The season opens earlier in France than on Eden, by two weeks, and I have this little personal challenge, a delight really, of the first dry fly captures of the year. Will it be in England or France that the first plume tip of the year is snaffled away? Soon, I’ll know.