This valley in a forgotten corner of England: After catching the cusp of grayling and trout seasons in France, I came back to a restructured river, large dark olives, March browns, and trout. Magnificent trout; typical Eden stunners. 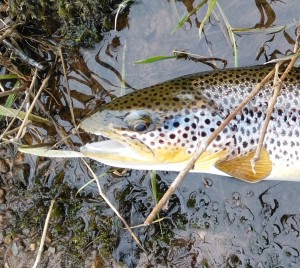 Actually, I experienced the best hatch of MBs I have ever witnessed, anywhere, and I was astonished by this, after the ferocious winter floods. They came off along with plenty of LDOs, and the trout were completely focused on the abundance, swimming right up into the fast water to intercept this rare bounty. Wonderful to experience this – I mean, if March browns are surviving in the system, and significant numbers of wild trout, it cannot all be bad. Also, the river bed itself, though massively changed, is scoured of the silt and detritus that had built up over the years. 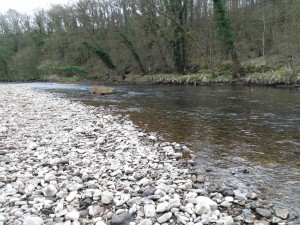 There are now massive new gravel shoals and bars. and though the trout (and grayling) are not necessarily in their old haunts – because these might not exist anymore – they are certainly where you would expect them to be, particularly on the foam and feed lanes. And when the March browns are hatching, you will find the trout right up on the fast water, intercepting the flies before they have the chance to drop onto calmer water. 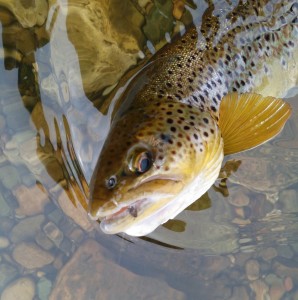 Curiously, both my recent visits have featured trout exclusively. I know the grayling are there, because of the respectable winter catches we had, but they seem to have disappeared, probably preparing for spawning. This is typical at this time of year, and we should be hopeful for a successful spawning for this species, because it probably was not very successful for trout and salmon, hammered by the flood waters. 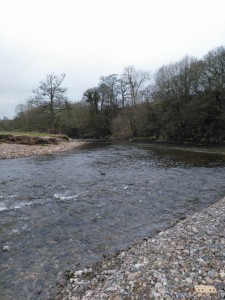 On this note, I did also notice some minnow shoals up at Sandford, so if this tiny fish has managed to survive the floods, I don’t think we need worry about trout and grayling. Nature is so miraculously adaptive. I wonder, though, about the ranunculus, because there seems almost none at all in the river wherever I have been, and precious little up on the feeder becks. It will come back, of course, but I wonder if ever again in such abundance as we used to have throughout the system. You never know, though. For all the abuse this river suffers at the hand of man, and the natural (well, sort of) affects of flood and drought, it adapts, changes, and ultimately survives, supporting magnificent trout like this. 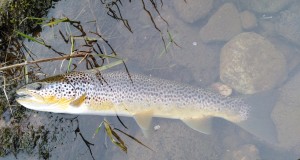 Contrasts: I wanted to visit a small tree planting (now eight years old) up on the edge of the common above Blencarn, so Ellie and I ran up there (in truth, Ellie ran, while I stumbled along after her). Disturbed to see a lot more tractor and quad bike tracks gouged into the ground than I remember, I was relieved to see, at least, that the trees are doing so well, now properly established in this one, tiny fragment of protected Eden upland. 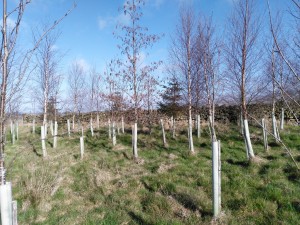 So, we travelled on, up towards Cross Fell and I became increasingly depressed. Everywhere in this – what should be preserved, cherished, limestone upland – was evidence of agricultural interference, to the point of widespread degradation, even destruction. This is looking back towards the Eden Valley: 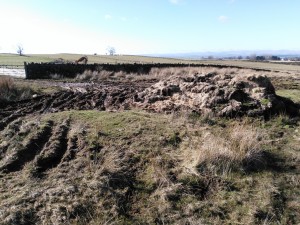 Tractors have pulverised the area, while sheep, in huge numbers, have converted it to a kingdom of grass. Even within three miles of the summit of Cross Fell within the Pennine Area of Outstanding Natural Beauty, the wild has gone from the place, and it is all so comparatively recent. This is nitrate fertiliser spilled on the common! 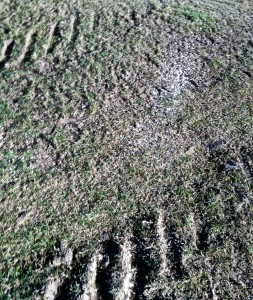 This, and tractors, and sheep, spell annihilation for most indigenous species that should be here. Understand that this is what DEFRA refer to as ‘severely disadvantaged’ country, which is a farm-friendly way of saying that agriculture is completely unsustainable here. It is too high, too cold, too north, too fragile, and so impossibly valuable in the scheme of English landscape, and yet… Very high up the Crowdundle beck, at a distance of four miles from Cross Fell peak, we found a protected section 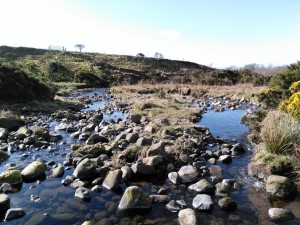 where there has been considerable planting, but like the field at Blencarn, it is so little against the overwhelming forces which are destroying the wild environment on such a scale. So much of it is like this: 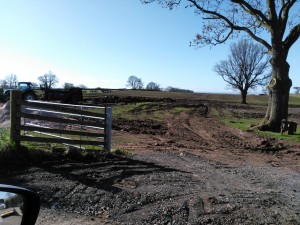 So, it was a relief to come down back into the valley. Damage enough down here, but the dilution effect and the scale of river means that there is more habitat that is less affected by the forces that are wrecking the uplands. I did not have a good hatch and did not even see a March brown. In fact, I walked a mile of river before I saw a rise, here: 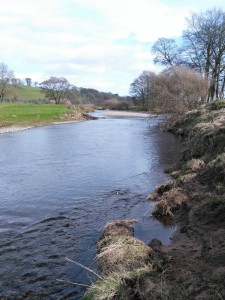 He rose to the plume tip first cast. Another Eden stunner; lean, tail like, well, like this, and the markings! 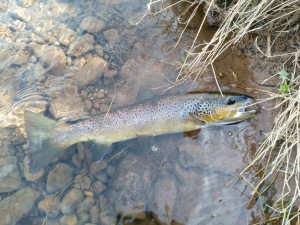 Good enough for me that day. Indeed, I saw only one other rise, but left it, uncast. Time to go home and come to terms with these contrasts.

In northern France, the end of the grayling season and the beginning of a trout season. Magical journey continues. 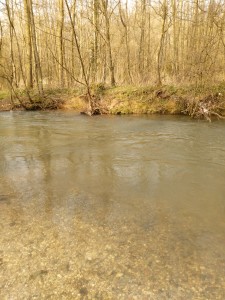 This is la Ternoise: a surviving, and improving, chalk stream, at Tilly Capelle. We started the new trout season here. Wojtek with streamer, me with nymph. This is Wojtek’s first trout; so typically Ternoise, so like a young sea-trout. 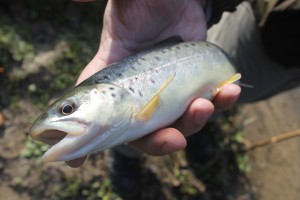 Before we moved on to the Aa to find the last of the season’s grayling, and the possibilities beginning with dry fly.High waters, stained, and very cold. Cold air too, with north-easterlies, and the trout were not very active, even when the LDOs hatched, while the grayling saved the day. Ouve Wirquin and then Wavrans. 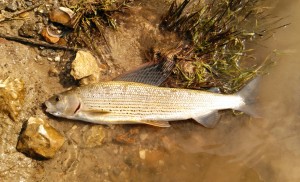 Sparse hatches and, in truth, grayling feeding more reliably on nymph, on Hydros, though the PTN jig scored most heavily for me. 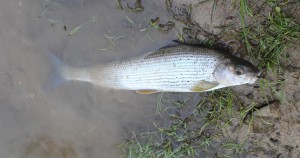 Cold, and so beautiful. So full of promise. Early spring, before it arrives in England. 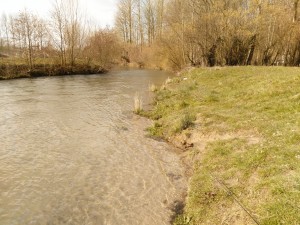 And it’s a journey, right, so we went south, to the Normandy beaches. This is Sword, where the British landed in 1944 at the beginning of Overlord, grasping Europe back from tyranny and evil. 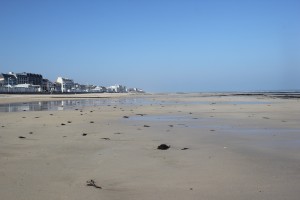 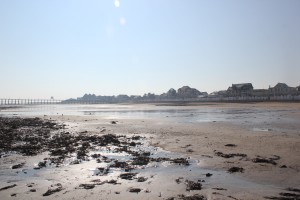 So peaceful now. 70-odd years ago, it was not like this. A different sort of beginning. A couple of weeks later, after this photo; Brussels, and we find ourselves, our Europe, pulverised by atrocity again.