It has been a generally cool, even cold, spring so far, as we come to the end of April, though interrupted by lovely days when it has been a pleasure to be out, by the water. The French chalk streams and Eden have been wonderful, after the fears (on Eden) we had back in the winter, with tremendous hatches of large darks and March browns (the best I have ever seen for this species) and latterly for iron blues, and the trout feeding reliably on them all. Nature is remarkable, surviving, no matter what our species does to it. When we’ve finally gone, when the Anthropocene is extinguished, will the living surface of the planet bounce back into a new garden, like it must have been before the homo sapiens era? There is still upwards of four billion years, before the evolution of our star to red giant phase, for this to happen. Anyway, right now the river is a lovely place to be and, weather notwithstanding, the fish are looking upwards now, towards the easy targets on the surface, particularly the up-wings. So it is dry fly all the way, or to be more precise, for me it is the plume tip. 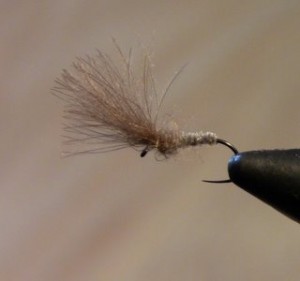 A lot of people have asked me about the plume tip, for an accurate tying description. Fly Fishing and Fly Tying magazine covered it some time ago, but I can probably simplify from that. Here is the point. It is, finally, so very simple, which is what dry fly fishing itself should always be. Actually, it is the simplest form of fly fishing that exists, even though there are those who have claimed otherwise, particularly among the traditional English school. But the truth is in that simplicity – of the technique and the fly. I recently started a blog on the new Sunray website, and have given the tying description there. It seems the right place to put it, because, frankly, what I refer to as the ‘ultimate refinement’ in our sport, is that beautiful combination of a Sunray Presentation Line (PL), on a very soft rod (and by this I mean a ‘true’ two weight, or lighter), a short tippet and a plume tip. Before the PL, this was compromised, because we just had to make do with French leader constructions or conventional, thick PVC lines. And before the plume tip, I never really understood it. So, if you want a tying description, do link to the Sunray blog. One day, I’ll publish a sequence of photos, or even a video, of the tying, but as with the finished result of the fly, the tying is extremely simple. Once you have tied a few dozen, and fished them, you will learn the subtleties and nuances of proportion and use of the sparse materials, such as they are. 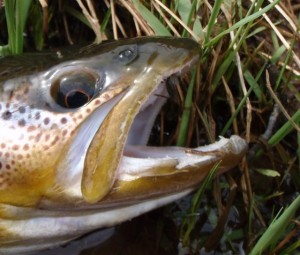 Anyway, they are looking upwards now, dancing upwards, and this is not only the joy of the season, but the ultimate joy in the entire sport, I think.