Rachel, it’s not ‘Silent Spring’… Close, but not yet. How has this season on a restructured river Eden been possible? We have watched the hatches develop and the immense numbers of trout kissing away the bounty; throughout the age-ranges, with giants among them. Large and medium dark olives, coinciding with phenomenal shows of March browns (the best I have ever witnessed, anywhere); then iron blues and medium olives, a peppering of large brook duns, a blitz of danicas, olive uprights and yellow Mays, and, the hint of pale wateries and spurwings, building towards a seasonal crescendo. On some days, many days, I have counted six different species of up-wing, hatching simultaneously, along with grannom caddis and various stoneflies, none of which have entertained the trout – not on my waters anyway – and falls of aphids, midges, black gnats and hawthorns, which often have. 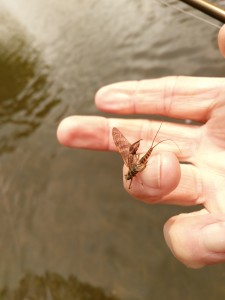 I have seen feeding with abandon, and then extraordinarily subtle and pre-occupied feeding, the latter always to the smallest food-forms that are available. The banks have bloomed, covering the scars of agricultural abuse; nature fighting back as only she can, smothering something so ugly, so destructive, and a unique function of our shameful species. And, oh, what trout, on the Appleby waters and elsewhere. I have often referred to Eden as a miracle of a river (thanks in the most part not to how we look after it in conservation terms, which is pathetic, but to very high annual rainfall and the large catchment, by English standards) although never before has this seemed more appropriate. I don’t think there can be the possibility of a ‘finer’ trout river in England, not now if ever there was, at least on such a large scale. Sometimes this season, I have struggled to think of anywhere in Europe that surpasses Eden. 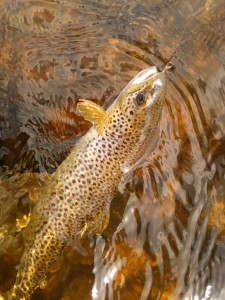 Perhaps I am too close to it, too consumed, too overwhelmed with its survival amidst ferocious forces that contrive to degrade it. Perhaps it is an odd type of love, that’s all: a love of something that is so intrinsically valuable in the natural order of things. Or maybe it is because here is a rare place that, in the greater scheme of things is actually still worth something in England, persisting, 70-odd years since our last defining moment of true greatness in the measure of world history. Or, you might think it’s just me, the way I am. If so, it doesn’t really matter. But if I’m right, it does. It just does.

And this does too: my friend Tom Bell, of Sunray, into a lovely Eden trout this spring. 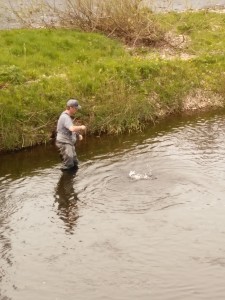 The ranunculus, one of the ESAC designated protected species, has almost gone, like the lampreys and the Atlantic salmon, like the spring gentian on the high limestone. Up on the feeders, and a few reaches of the main river which somehow escaped the scouring of flood waters, it persists. Given decent rain, it will grow and spread downstream. I have found some on the beck up near Asby and more downstream at Rutter Falls, so it really will come back. That scouring swept so much silt from the system, cleansing the river stones and gravels, a Carthesis. Except for that nitrate from the farms, and the algae, now dyed back under the extraordinarily sunny weather (non-typical in Europe this spring), robbing the invertebrates of a healthy river-bed habitat. The danicas will be alright, of course, because they have silt-burrowing nymphs, so everyone will think everything is fine; but the spurwings, iron blues and blue winged olives, the real benchmarks of a healthy river? Well, Eden has taken the ghastly agricultural abuse this long, and yet managed to nurture some of the most rarified river habitat surviving in England. 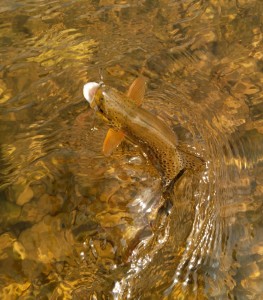 The trout fishing this spring has been as good as I can ever remember it, banishing the fears we had after the floods. Oddly, among three hundred trout, I have not caught a single grayling (on Eden) since the end of their season, and I have heard of very few being caught. It is typical of this time of year, during the spawning season, that they are scarce to the angler, but one always seems to catch a few out-of-season fish? There were enough around after the floods, in winter, so we are not particularly worried. Like the ranunculus, they will probably come back in plenty, and much sooner.

The rain stopped, some time in early May, and the river flow rapidly dwindled (another product of agriculturalisation and ruthless landscape exploitation by a minority). As I write this, it is almost as low as I have ever seen it, and there are long sections which are little more than still, stagnant pools, with feeble run-ins. Heaps of trout though; cruising about on the surface, mopping up tiny food forms such as aphids, micro-caddis and spurwing emergers, occasionally attacking the ever-increasing danicas. It looks like play – the little trout dashing about, sometimes among the gravels of the shoreline, where there is almost no water, and usually missing their targets. Fascinating fishing; you can be locked on a pod of fish, which can be dozens within casting range (then again, the giants are always by themselves, in beautiful, protected lies), and do everything just about perfectly, so you think, only for them to take no notice whatsoever. 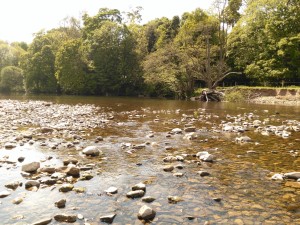 You can watch the different-sized fish, ranging from 8” up to beasts nudging two feet, and can spend so long at it that you begin to recognise individuals, the subtle differences in their feeding manner and the way they patrol. It reminds me of still water days, all those years ago. 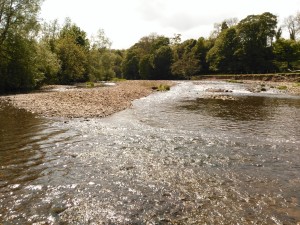 Typically, you catch a fish immediately, and then, even though fish continue to show, they are different. They don’t look spooked, but they are. So, you have to up your game, or move. I love it like this, although I do miss the more obvious vitality that higher, faster water brings to the river. Now, you have to observe properly, analyse, move like a hunting cat. Funny how my tired, old joints that normally rebel painfully during other forms of exercise are now no more than background, an awareness which just makes me move more slowly, and, in fact, more like a predator. You know how I always say that fly fishing involves using one’s whole body. The best river anglers (and this really is just a handful) I have known do this so beautifully; they engage the river, becoming a part of it, rather than something that disturbs it. 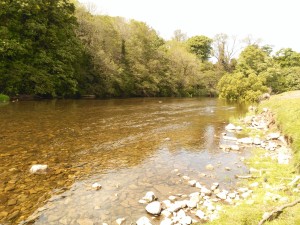 After all that easing into position, the stealth, and the observation, all it takes is one cast. Why should it need more? More is inefficient. More is noise. I am using the 10’ #2 with the Sunray dry fly line (Tom calls it ‘my’ line, but he’s the technical genius; I’m the fly fisher), also a #2, and 0.10mm tippet. Inevitably, it is the plume tip, in a 21, and very sparse, ephemeral. Simple again. 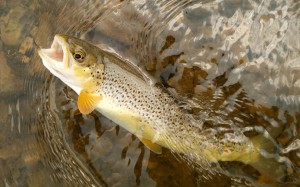 We are still hearing so much about long leaders and tippets, and elaborate casting techniques, much of it nonsense. Some are obsessed by tenkara, or what is fashionably referred to as Italien-style casting. We hear about pragmatic five and six weights with tapered leaders, cast on short, stiff rods. And there are those who go further, into the domain of true two weights, even lighter, but are still hung up on elaborate leaders. It is all just a hangover from how things used to be, with due deference to the western uptake of the fixed leader approach, tenkara. We used to have to rely on the extremes of thick PVC fly lines and French-style leaders. Extremes, that were always just compromises. Evolutionary steps. Now we have the Sunray micro-thin lines, the status quo has changed. The game has changed. Anglers are going to take a while coming away from the conventional fly line mentality, which necessitates the use of a long tapered leader/tippet, just to place the fly far enough away from the disturbance of thick fly line. But it will change, inevitably. With the micro-thin lines, it is like having a built-in leader and you need no taper in the tippet whatsoever, just upwards of 3’ to a maximum of a rod length of level tippet directly from the loop of the line tip. The more inclement the conditions, the shorter the tippet; though this is an oversimplification of what’s going on. Length of tippet has an enormous effect on presentation. So, I’m just talking generally here. It’s not something one thinks about, really, or should need to think about. Instead, just adopt, subliminally, the right length of tippet for the moment, though this is always shorter than anyone can get away with using a conventional line. 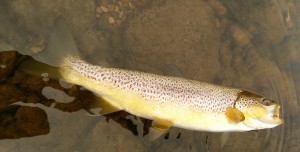 And in truth, I most commonly use the tippet that was left on the line at the end of yesterday’s session ? Start with that loop on the line tip and add a section of tippet (via loop-to-loop) that you think you can manage in the conditions, and don’t worry if it seems a bit short. If you’re using a Sunray, it probably won’t matter at all, even on wild fish, particularly on wild fish, which are the only fish that really matter.

I’m back on the French chalk streams soon, and different fish, different wild fish, although with the same universal – well European – approach, which is as far as I want to go. It’s not that I want to leave Eden, this magnificent river. I have seen the miracle bloom, but I should not stay to see it collapse. 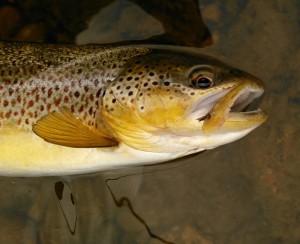