It has been almost as wet in France as southern England this spring and early summer. The difference, though, is that the chalk aquifer here is comparatively undamaged and while the streams are running full and a little coloured, they have been entirely fishable throughout. We have explored a little more than usual, and I find myself overwhelmed by the extent and variety of magnificent rivers in this region. 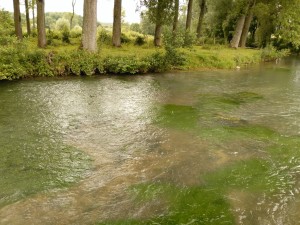 One wonders at the historical nonsense about most of the world’s chalk streams lying in southern Britain, given that the French chalk plateau dwarfs the English deposit, and there are more chalk streams in even the Pas de Calais than all those in England, notwithstanding the immensity of chalk reaching out east into the Champagne Ardennes and south to Normandie.

For all that, it has been decidedly ‘nymphy’. Adult upwings and caddis have been scarce, usually appearing in small, scatter hatches. The colour and flow rate have kept the fish mostly close to the river bed, and they have been reluctant to rise to the surface even when a reasonable number of upwings are present. 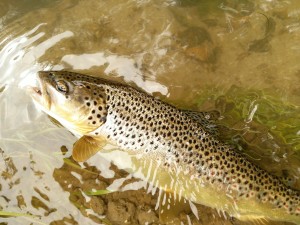 Nymph fishing friends have generally done well, mostly fishing the Ternoise, Aa and Lys. ‘Glacial’ Malcolm and Neil were averaging four or five fish a day, and also discovered some new water on la Lys which they both consider to be among the very best chalk stream habitat that exists – a new favourite for both of them. 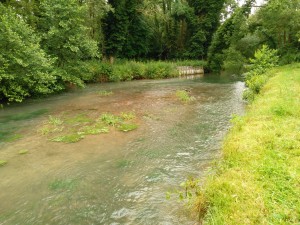 Conditions were about as tough as it comes during their stay, with some horrible down-streamers, so this promoted a bit of hunting, and thinking out of the box. 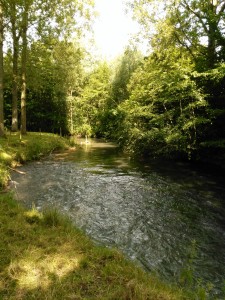 Great fishing, chaps, and I’m already looking forward to next year exploring still further – and this before our little visit to the San this autumn.

Luke and James fished the same streams, though mostly different areas, in generally better conditions, and being as fit as fleas, and adventurous, explored masses of scarcely fished (or un-fished) water. Their results simply blew me away, returning home after exhausting eight hour sessions with double figure catches, almost all on the nymph (PTN). Here is Luke hunting and hooking a big trout, which he lost, on a nice bit of Theo Pyke-esque ‘Trout in Dirty Pl 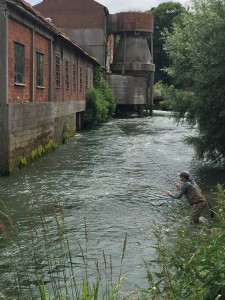 aces’ water (in fact, Theo fished here last year). We all noticed that Duo was a great compromise method in the prevailing conditions, and the colour density and form of the Oppo certainly resulted in bringing so fish to the surface, both trout and grayling, though the PTN was supreme. 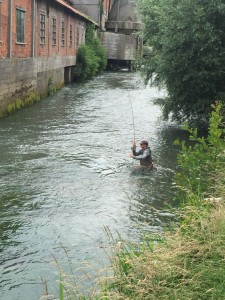 Finding this, I have tried plume tip over identical water, but seldom managed to entice fish up.The streams are gradually clearing though, and I expect the plume tip to be the top scorer very soon. It is already emphatically the best fly to use on the upper reaches of these rivers, and in the overgrown tributaries, where the water is so clear. 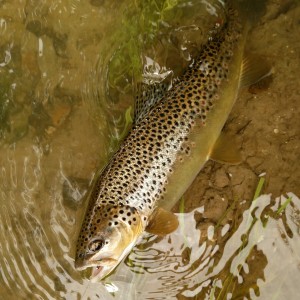 A short while ago I met a local flyfisher on the Ternoise and after, naturally, talking about the fishing, he had to ask me what I thought about the referendum. I think he was relieved to hear of my disappointment, even horror, at the result. His comments translate to this: ‘Your country fought two world wars in my country, fighting for freedom, and realising it, and you have been the most stabilising influence throughout Europe ever since. And now you leave us?’ It is the aspect of betrayal that hurts. It is now an embarrassment to be English in France, and I loathe that feeling. No matter what the French, or other Europeans have done, historically, I thought, and they thought, we were better than that. And now what for my country, without European legislation; what might you offer for the protection of our last, fragile, ultimately precious environment? 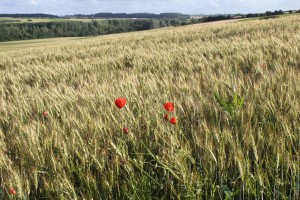