Because it is the San, again, in the spectral chaos of autumn, the change of season, and the blue winged olive hatch. Wojtek is here, of course, and other friends. 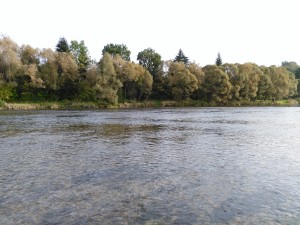 It has been almost a year for me, longer for Neil and Lawrence, and even more so for Nick and Paul. For Kevin, our young Ireland international friend, it is both his first visit and his first encounter with grayling. What a place to catch one’s first grayling! 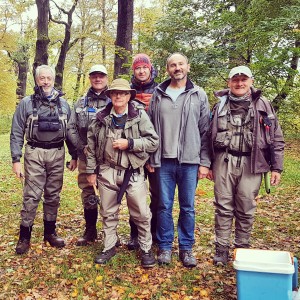 Clear waters, dropping from the pristine Bieczszady forest and the Ukraine frontier. She is a potent mistress, when the other drugs don’t work anymore, or barely so. 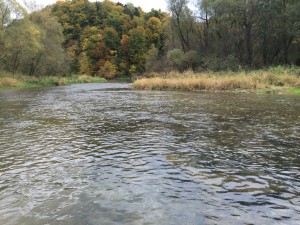 For a week, I fish a plume tip, just a plume tip, among the blizzard of the BWO. It reminds us of just how lesser are all other European rivers to San, how in the esoteric sport of fly fishing, all else is less. Heady this, during which we can hardly come to terms with the super abundance; the early trickle, then afternoon swarm of BWO, with trout and grayling up at them, in impossible numbers. 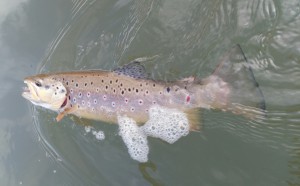 It is a question of scale, you think? It is one of the natural wonders of the world, I say, and in fly fishing, an all time high. That climb, up the staircase of those other worthy places; Eden, the French chalk streams, the clear waters of southern European rivers. Finally we are here, where, I think, we fly fishers were always meant to find. 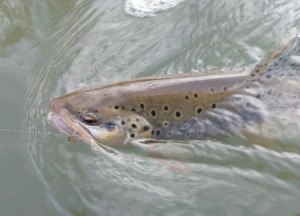 It is where the sublime simplicity of the plume tip was discovered, among these countless foam lanes. It is where I realised the ultimate refinement in this odd, hinterland of human cultural activity. And grayling, liepien, des ombres, the ladies of the stream, well, the ultimate game fish, whatever you hear of other species. 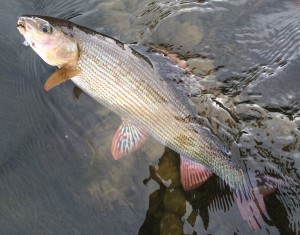 And on San, we find the limit of possibilities in a sport, of grayling, of invertebrate biomass diversity, culminating in the BWO. 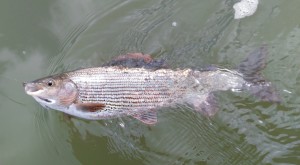 It is that magnificent, and that simple. This river that flows from the forest in the mountains, and through the forest of an immense valley where nature can still work as she should. We do no more than perturb this place. 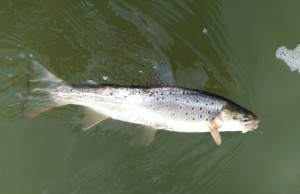 And yet, you know, don’t you, that the high cannot last forever? 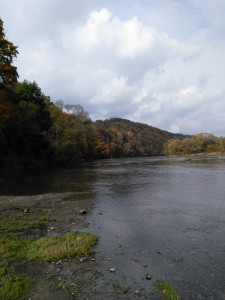 You have to come down; cannot remain for long at this altitude of nature’s frontier. Once a year is probably enough for me, now. To reassert all that is good about what survives in Europe, to share the experience with a few good friends. And yet, we northern Europeans cannot possibly really understand it all. Every time I go back to San I find myself in wonder, adjusting to it. Yes, there are similarities, consistencies, even, from a fly-fishing perspective, an invariance with rivers to the north and west; but this is a place where the contrasts are simply staggering. There are still bears and beavers, 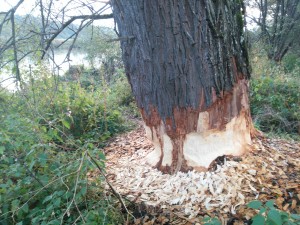 wolves and lynx, while the river’s fly hatches and population of trout and grayling are utterly incomparable with anywhere else. There is a moment, among all of them, that echoes with me now. I am fishing during the hatch cascade at about two in the afternoon. I am alone in the enormity and have settled on a stream within the thousands of streams amidst the ‘no kill’ tailwater. For over an hour almost every targeted rise has been a trout. 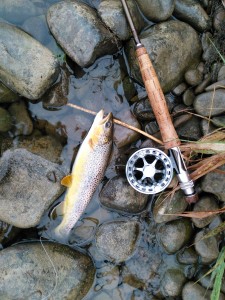 Accuracy on these aggressive feeders has not been important; they seem to take as many of the naturals as they can reasonably reach from their station, surely expending almost as much energy as the food value of their prey. 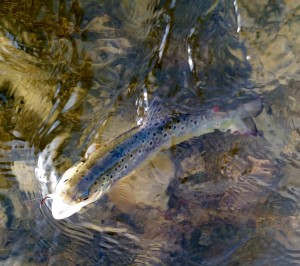 And yet not, because that cannot work in nature. Nonetheless, there is an abandon of feeding activity before, at last, I can pick out more subtle rise forms. In a very short period of time there has been a metamorphosis. Abruptly, the river has changed and, now, grayling dominate the feed lanes. Now I have to be extremely accurate, drifting a fly almost centimetre-perfect to the rise form, and with good timing, because a grayling does not take every fly that passes overhead. It is such an efficient feeder and to cast at it when it has just risen can do no more than spook it. 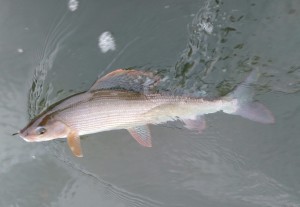 We learn this much, anyway, and it is a delightful invariance between San and Sava, Eden and Aa, or anywhere that big grayling exist. And finally, the plume tip entices the ultimate fish and I realise that I am, right here, at the very limit of this narrow field of activity that might allow a man to embrace nature.