It was a long time coming, but finally, I managed my England team in the 2017 IFFA Rivers International on the delightful River Ebbw 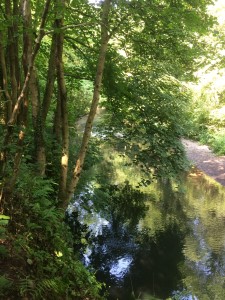 in South Wales. I am so grateful to have had this experience. It has shown me just what it is I have missed since I retired from team selection, back in 2009. It allows me to live it all again, with great anglers, to be at the frontier of our sport. Seeing all the old faces again, a little older, but also meeting some of the new. The stalwart; my ‘professional gentleman’ friend, Ian Campbell, IFFA International secretary. All my friends, all the history, my magnificent team, this moment in Wales… Yes, it has been like coming home.

30 degree plus heat met the teams (this after months of prep through the spring), and a shrunken river. 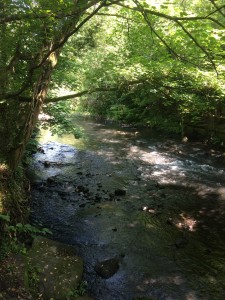 Nothing new here, though. I recall that internationals were seldom as you imagined they would be, or fished in great fishing conditions. This is not the point. I had forgotten how tired I have become seeing all those trout caught, and sickeningly displayed, like medallions, by those who can choose their time on the river. In internationals, at this level, it is never like this. 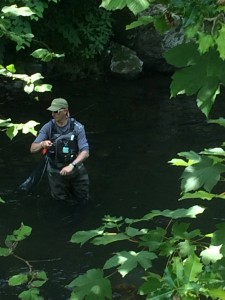 Even so, 251 trout were caught by the 20 competitors (five from each nation) on the day of the international, the 23rd June. Each and every one of these was returned alive, no worse for its experience, to the river, having been measured by the controller and having experienced about 10 seconds airtime. 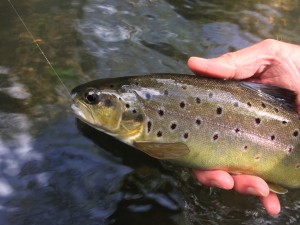 This one came in practice, to a plume tip, and had five seconds airtime! Absolutely no pause for a photo in the international.

Think of that: an average of over 12 fish per angler, through the difficult time of day, in water of wildly varying type and productivity. Make no mistake; these fly fishers, at this level, are simply outstanding in the exercising of their great skills. I think they have now gone to the next level with nymph fishing, beyond what we could do in the early years of French leader. I don’t think we have moved on with dry fly, on the river, at anything like the same rate; but then the Spartan simplicity of ultra sparse CDC flies and the ultimate refinement of ultra thin fly lines are right now changing everything there, as the leader did with nymph fishing.

And in any case, the pragmatism and experience of the modern international competitor, utilises all the methods, seamlessly. In the morning I watched Rob Bending, Team Wales, working his way up a section which one of my team, Jonathan Barnes, would fish in the afternoon. This is Jon, with Steve (about to go into a demo for us) and Harry, our great team reserve. Oh, the temp was 33 degrees at this moment. 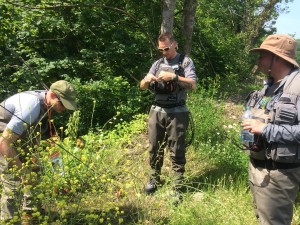 I watched as Rob switched rod and method according to the water type and conditions, working upstream. It was a breathtaking example of pragmatic, international level fly fishing. He came to a spot we as a team had earlier identified as prime dry fly water (meaning you were only going to extract the best out of it with dry fly). Rob switched rods at precisely the moment that I would have done so, going dry – three casts before the perfect one was made, and he tapped into a 45cm wild brown which he coaxed into the net fifty metres downstream of where he had hooked it. 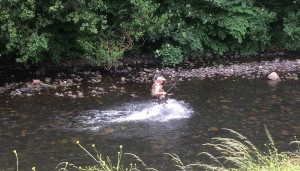 Here he is, fish netted, charging upstream towards his controller, and the team win.

Awesome performance, Team Wales. Strong leadership by manager Paul Jenkins, and, son, Kieron, as captain. But then, you were never going to be beaten on your river. It was always going to be about who came second. Team England did not have a good draw, but they went in resolutely and simply made the best of it. At the lunch time break we were firmly in the wooden spoon position. I was devastated. All this work, all this effort, from those who deserved so much better. I had watched one of my team, Fred Bainbridge, fish a section better than, well, I could possibly have fished it myself. Without leaving anything, anything, behind, 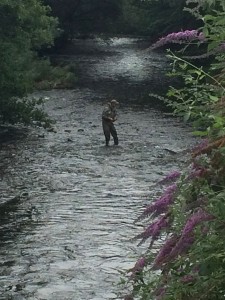 catching five trout that I would not have caught, not all of them, and you? Steve Cullen had drawn miserable water. He had done everything, and more, and taken two total immersions. Andy Ford, on what we regarded as the worst section of the entire 10 miles of river had saved the blank in both morning sessions. World Class, Andrew Scott admitted to what he saw as a tactical error in his first session, but had peerlessly demolished his second. Jon had a nightmare on, yes, the second-worst water we had identified. Wild West Street, Caravan.

But then, the turning point. There is always a turning point. Fred: ‘right, I’m off to win it now; I’m gonna destroy it’, he growled. Andrew: ‘I can’t believe I was outdone in that first session…’ Suddenly, after the shock of knowing our position, everyone felt the same way. The desire to turn it around was palpable. I watched it infect the whole team. And they went out and produced a typical, great England ‘last ditch’, effort which did indeed turn it all around. 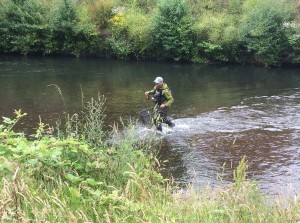 Steve bringing a good trout to his controller in the third session.

For all the teams a mixture of nymph fishing techniques was the ‘percentage’ approach, although dry fly was certainly significant. John Barnes drew water in the afternoon where Ireland’s Eamon Conway (below) 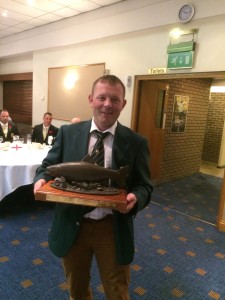 had taken twenty trout in the morning, on nymph, including the biggest fish of the international, at 56.3cm, so Jon had to resort to searching the lower part of this beat for any fish which might not be spooked or had not been caught. He saw five rising trout through his two sessions in the afternoon. He rose every one of them, and netted four. Meanwhile Fred and Andrew were winning their sessions and Andy Ford (below in a practice session), 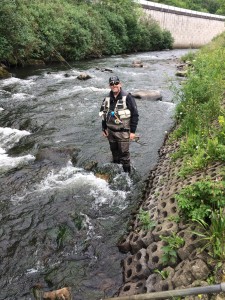 again on mediocre water, at best, managed a high placing in his final session.

Even so, I did not know if we had done enough, right up to the moment when Ian Campbell came out of a lengthy evening session working on the score cards, to tell me that we had taken second place by a mere placing point from the Scots, who in turn had pushed Ireland into fourth place by a single placing point. This was a stunning result really; a great Team England performance and I am enormously proud to have been a part of it. 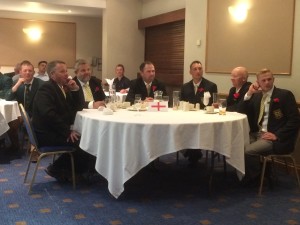