I hardly know where to start.  I am again like the little boy who used to fish the streams of Kent and Sussex before the ravages of agriculture and over-population changed these counties forever.  I have been fishing the chalk streams of the Artois region of northern France and I keep having these jolts of memory, from 50 years ago.  Almost everywhere I go on these wonderful little rivers I am reminded of rural, southern England, as it was back then. 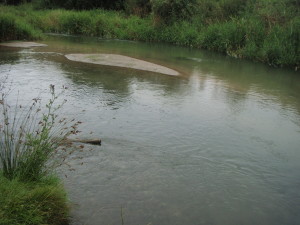 I am learning again, too, learning afresh, learning how rivers really should be in terms of fish populations, wildlife and conservation measures, and learning how to fish them, far better than hitherto. It is raw fishing, because the landscape and the river habitats feel raw.  They are not ploughed or grazed to the last blade of grass at the water’s edge; they are not used as farm sewers; they do not have ridiculous populations of stocked rainbows.

The ‘category one’ rivers mostly just have wild brown trout, though a few have grayling.

At least, my favourite of them all, the Aa, has grayling. My catch rate has increased considerably on this river as I learn to measure the approach and taylor the presentation to the needs of the moment.  I still have a long way to go, but I have had catches into double figures now, predominantly with grayling, and they are beginning to come to the dry (having caught on both Oppos and plume tips). Nymph remains generally more effective, particularly on duo rigs, with ballasting of the nymph absolutely key to drifting through at the right depth (which changes continuously).

Most effective nymphs on recent visits to the Aa and Ternoise have been Ryac-style jigs (14 – with 2.4mm gold tungsten beads) and Hydropsyche-style jigs (12 – with 2.8mm silver tungsten beads); both fished under a 15 Oppo, which has brought up the occasional trout.  I have been using jigs because these are a little less prone (than conventional nymphs) to catching on the omnipresent tree roots and other hazards of the river bed – though in my experience they are probably better hookers, with a cleaner, top of the mouth hook hold.

Over the last few weeks I have seen more large trout than ever before on both the Aa and Ternoise.  Fishing a section of the Aa new to me, at Wavrans sur L’Aa, I hooked a grayling which, as I drew it towards me, was followed by an enormous trout (perhaps between four and five pounds).  Later, and farther upstream, I hooked an even bigger fish (on a Ryac jig), which I could do nothing with for about two minutes.  It was in shallow, fast water, and when it eventually swam upstream into calmer water where I had a good view of it, I estimated it at clear of six pounds.  Infuriatingly, as the fish relentlessly drew up towards (inevitable) tree roots, the hook pulled free.  Curiously, I also hooked and lost a very big grayling on this same section.  All bad angling, I concede, but it left me trembling with excitement.  I did manage a rather special trout on the Ternoise, however, this time at Anvin.  My catch rate on this river is a steady one fish per session (all trout – no grayling on this river), and one evening, just as the light began to dwindle, 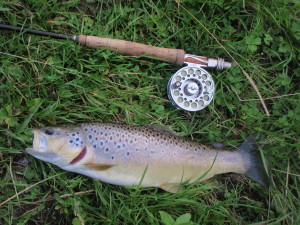 this trout obliged to the Hydro-jig. It was 46cm, and somewhere around two and a half pounds.

On a bright ‘fish-spotting’ day I had a reconnaissance trip to Ouve Wirquin and Fauquembergues and was delighted to see both trout and grayling nymph feeding, including this giant

just below the reserve 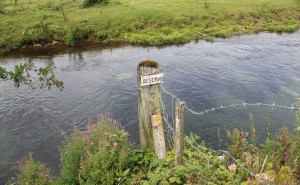 at Fauquembergues, where Neil, Lawrence and I fished in the spring.  This is a 2kg+ fish, without a doubt, and I think it is somewhere around 2 1/2 kg – a five pounder.  When a tail goes blue, and opaque like that, and like a shovel, you know there is a huge trout in front of it!