How strange it feels being temporarily back in over-crowded England after what has been the most gorgeous summer I can recall, with fabulous fishing on the Artois chalk streams.

This is the Aa at Ouve Wirquin.

It has been so lovely, too, to share the experience with numerous fishing companions.  Gradually, as the journey of discovery of the vast array of possibilities here continues, one realises that the trout (and sometimes grayling) populations are not that small.  In some rivers they are high, and more like the English equivalents, though dominated by wild brown trout rather than stocked rainbows, which infest so many chalk streams in southern England.  What is difficult, more often than not, is the access and one’s ability to present a fly. The banks are densely treed and enmeshed in a tapestry of wild foliage. 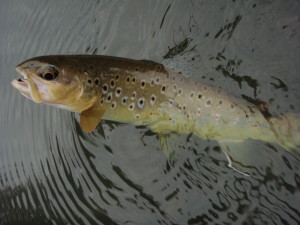 This is a trout from the Lys, taken on micro nymph on duo rig on tenkara.

The area has also not escaped the Europe-wide curse of Himalayan balsam, which further shuts down bank-side access except where the angling associations have cleared it.

Two weeks ago, five friends – Sue and Paul Sissons, Gavin Walsh, Lisa Isles and Phillippa Hake – caught over a hundred trout and grayling in six days of fishing on different sections of the Ternoise and the Aa.  The ratio was about 6:1, brown trout:grayling (though there are no grayling on the Ternoise).  This is an incredibly high catch rate, scarcely matched even by top French internationals who practice here (among the very best competitive fly fishers in the world), but what was most striking was the quality of every single fish caught – perfection in fin and glistening flesh.  Everyone remarked how obvious it was that none of these fish had ever eaten a trout pellet.  On which English chalk stream could we say this? Every one of my friends had stories to tell, virtually everywhere they explored, and like me, were overwhelmed by the fly fishing potential of these idyllic rivers. 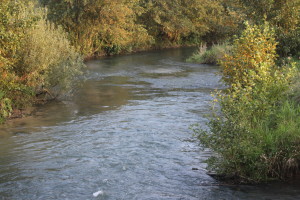 This is the Ternoise a little downstream of Tilly Capelle.

Since my group of fishing friends left I have continued in my exploration, visiting at least one new river each day.  The Lys in the area of Dennebrouke, Coyeques and Théruoanne has gradually opened up to me, as I find the access points, and in each case I find the trout, though no grayling which are reputed to exist in this river.

This is the Lys at Coyeques.

Interestingly, and in common with almost all rivers and river sections I have so far found, the fish are much more likely to be nymph feeding than rising. The sub-surface nymphal activity is astonishing, and hatches, unless they are of upwing species such as pale wateries, seldom have the same affect on the fish as we expect elsewhere.  A river that has bewitched me recently is la Planquette, a neighbouring river valley to la Ternoise.  The river is small, yet definitively a classic chalk stream, flowing through meadows, woodland and impossibly pretty villages.  The AAPPMA has long stretches of this river and much of it is fishable with fly.  Walking the banks with my daughter Ellie, we counted upwards of a hundred trout over about two kilometers of river.  We watched some of those we did not spook and could see an almost continuous nymph-feeding activity, with rapid darting from side to side as the trout intercepted the nymphs drifting on the feed lanes.

I will write more about all these rivers shortly.  Right now I am going off to see my friend Keith Wallington who is fishing on the Eden at Appleby, and I have to get ready for my annual trip, next weekend, to Corwen on the Welsh Dee, followed the following week by a trip to Slovakia and Poland.  And yet, all there is in my mind’s eye, are images of idyllic French chalk streams…